Crude Oil Trade: Nigerian liftings up in July as the USA strengthen their share

August didn't start well for the West African crude oil producer. Nigeria Union of Petroleum and Natural Gas Workers (NUPENG), one of the country's main trade unions came close to industrial action last week, over a staffing dispute with Chevron. NUPENG had accused the US oil major of dismissing hundreds of Nigerian workers and altering contracts. The union was ready to proceed unless all "NUPENG executives" returned to work within seven days. However, the union suspended its plan after talks with the state oil company.

Meanwhile, the Nigerian National Petroleum Corporation (NNPC) commented that investment decisions in oil projects in Nigeria have become increasingly difficult, mainly due to the current fiscal regime. Several investors have recently opted for other producing countries, realizing the risks faced in any Nigerian project. NNPC focus on growing national oil reserves, targeting 40 billion barrels by 2025, with crude oil production targeting three million b/d. But these scenarios assume that required investment will be attracted, which hasn't proved to be an easy task so far. Africa's largest oil producer is relying heavily on crude sales for its income, but meanwhile imports most refined fuel it consumes.

NNPC has been planning to review its payment structure for energy joint ventures to financially support projects that typically struggle to secure contributions from the Federal Government. This will allow these entities to raise capital through equity or debt. This could dramatically improve terms for investors, who have been rarely paid on time in the past. Chevron, ExxonMobil and Shell have been some of the company's joint venture partners. 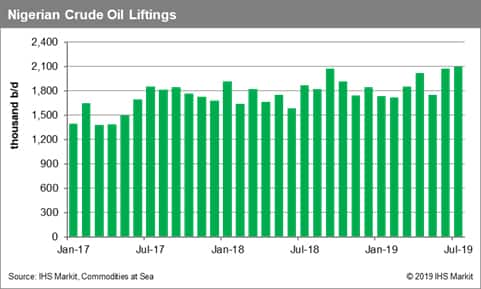 Focusing on trade flows, as depicted in IHS Markit Commodities at Sea, Nigerian crude oil liftings have strengthened further during the last couple of months, with July's levels having approached 2,100 thousand b/d. This is only a marginal increase of 1% month-on-month, but quite dramatic since July 2018, with volumes up by more than 10% year-on-year for July and around 8% for the first seven months of 2019. Europe has been absorbing about 46% of Nigerian barrels since early 2019, with India importing almost 18%, while another 14% has ended up in other destinations across Africa. It is also interesting to note that the US has been increasing imports from the West African country since June. 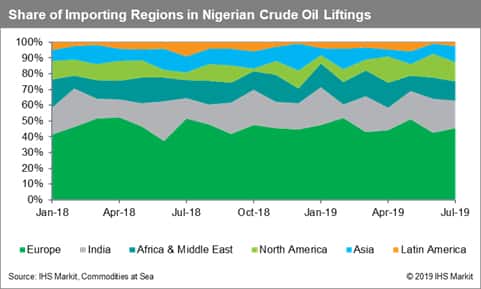