With the US turning into a net exporter of crude oil, flows from Nigeria to the US Gulf have been dropping since early 2018, with some exemptions to notice when the domestic market ran short of similar crude oil grades. Meanwhile, the US competes against Nigerian barrels across Europe, adding more pressure to African producers. But the sanctions against Venezuela seem to of had an impact on the trends developed during the second half of 2018. In 2019 so far, prices for Nigerian barrels have been supported by increasing demand in India and other countries in Southeast Asia, with prices having reached new five-year highs. Without doubt, this has been bad news for European buyers, who would have hoped for the market to lower. Nigeria also competes with other grades such as Caspian Pipeline Consortium (CPC) or even North Sea crudes, with the discount on Nigerian barrels covering the higher cost of shipping from West Africa. 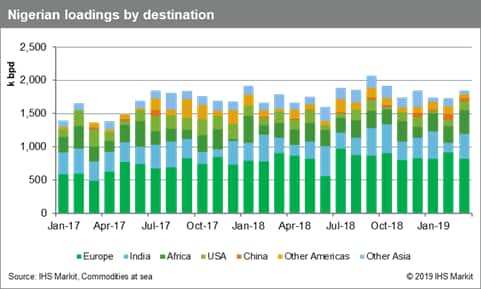 But as the market starts seeing some interest from the US for grades like Bonga and seasonal drivers expected to shape demand for Nigerian crude, optimism increases. European refineries should be looking to buy more around this period, which then typically supply more fuel to the US, where the summer driving season approaches. Moreover, the US might experience some further decline in terms of oil well productivity in the Texas's Permian basin, which could be good news for Nigeria. US drillers seem to be determined to cut spending.

Nigeria should consider what might follow in the Indian market, as the US have started targeting Indian refiners like Indian Oil Corp, who recently signed its first annual deal to buy US oil earlier this year, for 60,000 barrels a day up until March 2020.

In terms of production, Nigeria's Petroleum Minister Emmanuel Ibe Kachikwu recently admitted that his country is finding it rather challenging to reduce its output to the quota assigned by OPEC, not least because of the start of production at the Egina oil field, with a capacity of 150,000 bpd. Nigerian officials have been commenting that the country's target has been almost met, suggesting that production in March averaged 1.7 million bpd, slightly higher than the 1.685 million bpd agreed with OPEC+. But recent data made available in IHS Markit's Commodities at Sea suggests that shipments actually increased in March, having surpassed 1.8 million bpd.

On a positive note, the country managed to lower the average production cost per barrel of oil to just USD 23, aiming to reduce this further, to USD 15 per barrel. However, investors still seem to be reluctant to commit more capital to field exploration and development, as the risk of instability remains high. Exxon is understood to be actively looking to liquify assets in the country worth around USD three billion. However, other majors like French Total only recently added more capacity at the new offshore field, Egina. The country is still far away from achieving the four million production target, delivering less than two million barrels per day.