Crude Oil Trade: More pressure for the US due to coronavirus

There's no doubt that China's demand for crude oil will be hit due to the coronavirus outbreak. With crude oil prices lower, as the country driving global demand growth seems less thirsty, the big question is how major suppliers of oil will be affected? Oil producers based in the US, the major driver of global supply growth, have been going through downsizing to rationalise debt. These companies will face further cutbacks, after the latest shock hit world energy markets. Both oil and gas prices are under severe pressure, with demand set to remain weak, while supply doesn't seem flexible enough to quickly adjust.

According to data by IHS Markit Commodities at Sea, crude oil shipments coming from the US recently surpassed seaborne imports but flows in both directions remained below three million b/d last month. The recent drop in oil prices could affect future flows, as several of the smaller companies adjust to the new conditions in the market. 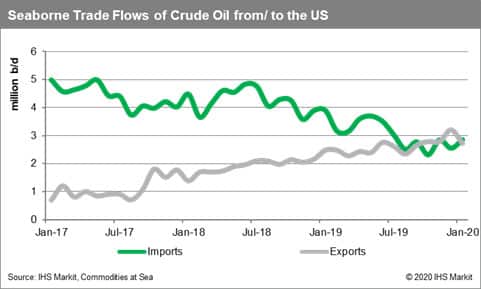 With lower expectations that energy commodity prices will recover this year, investments in exploration and production will be remain low. The price of West Texas intermediate crude oil (WTI) fell below USD 50 earlier this week, with a decline of around 20 per cent to observe since last month. The US is not heavily exposed to Chinese demand, as the trade war kept flows low last year, but with a noticeable increase over the last two months. However, China still buys about 200,000 b/d of crude oil and fuels from the US. This represents less than 2.5% of the country's total exports. But China's demand still determines oil prices around the world.

Even if other suppliers such as those across the Middle East rely heavily on China, the financial damage could prove much worse for the US. Producers such as Saudi Arabia and Iraq are estimated to have suffered losses of around 10% after the recent drop in crude oil prices, while US-based producers have to cover a much higher break-even for oil drilled, which stands roughly at USD 45 per barrel. Profit losses could reach 60% for some US companies.

With China's oil demand already estimated to have dropped 1.4 million b/d since last year, the effect of the coronavirus in the global market could reach up to 4% in February, or almost four million b/d. Meanwhile, we should also expect a sharp drop in jet fuel demand during the peak of the epidemic.