Saudi Arabia, as most other crude oil producers across the Middle East, look determined to supply full contractual term volumes to Asian refiners. April would be the fourth consecutive month that this would happen, even if OPEC members promised to reduce their production since late last year. Oil prices are expected to be further supported, since Middle Eastern producers haven't added any additional term volumes despite several requests by Asian refiners. This translates into an increasing amount of the market now getting covered in the spot market. Saudi Arabian production has been declining, but flows to the Far East haven't, with the Kingdom's appetite to supply more to China. Demand for sour crude will most probably remain firm, as we approach May, while supply of medium and heavy crude will turn tight, bearing in mind that the summer demand isn't far away. Demand for middle distillate cracks looks rather good and could get even better. Aramco looks committed to fulfil Asian term volumes, even if it has to proceed with cutting production according to OPEC+'s agreement. Other Middle Eastern producers seem to be behaving similarly.

Oil refineries across China, Japan and South Korea are still a priority for OPEC members, since they account for most of the demand. Long-term agreements must be met, with any cuts announced to term customers usually within the first half of the month before loading takes place. But so far, Middle Eastern producers have been fully subscribed. However, most producers simply reject any requests for incremental volumes from Asian refiners.

Focusing on Saudi Arabia, crude production is set to reach 10.1 million bpd in March, as the country remains loyal to the OPEC/non-OPEC output cut agreement that come into force in January. Under the deal, Saudi Arabia agreed to cut its output from 11 million in November 2018 to 10.31 million bpd. Russia won't participate in the monitoring committee of the OPEC/non-OPEC coalition which met earlier this week in Azerbaijan to examine compliance with the current deal and discuss what could potentially follow. Saudi Arabian officials have already expressed the view that since the global oil market is far from rebalancing, with global inventories still rising even after the US implemented harsh sanctions on Iran and Venezuela. It won't come as a surprise if OPEC expands output cuts into the second half of 2019. 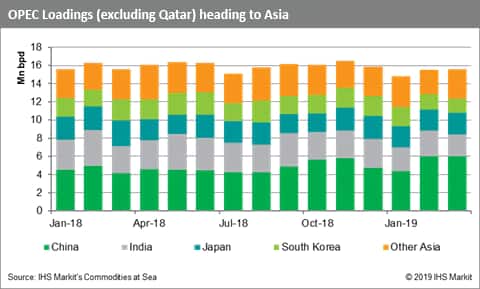