Pemex recently announced its results for September, with crude oil production having reached 1.731 million b/d, up 24,000 b/d since August, but still down by 96,000 b/d year-on-year. There has been a very slow but still noticeable recovery to observe since May 2019. The company also reported improvements in refined products output. Pemex has been committed to a new business strategy, adopted since earlier this year. According to this five-year business plan, there are plans to increase oil production to 2.7 million b/d by 2024. Mexico's state-owned company has increased investment in the shallow water fields of the Gulf of Mexico so far in 2019. Production is expected to expand further by the end of this quarter, thanks to the start-up of 11 new development wells and ten exploration wells coming online by the end of 2019. However, there has been a decline in the company's bottom line profitability. A net loss of almost 88 billion pesos (USD 4.6 billion), was reported, much worse both quarter-on-quarter and year-on-year.

Focusing on the impact of Mexican seaborne exports on shipping, flows from Mexico have been dominated by the US, with the country still absorbing most Mexican shipments. However, as the distance to be covered between the two countries is so short, the real impact comes from flows to the rest of the world. Spain and the rest of Europe continue importing Mexican grades, with their share having increased dynamically last month, with total volumes having reached 300,000 b/d. This came in parallel to a sharp decline in shipments to India since September. India's appetite for Mexican grades has been rather volatile and affected by price differentials and availability of cheaper barrels from nearby suppliers, mostly Middle Eastern exporters, such as Iraq. A similar decline has been observed in barrels heading to Korea, a route which has developed since late 2018. However, we're still expecting the Far Eastern importer to remain interested in Mexican grades, as we approach 2020. 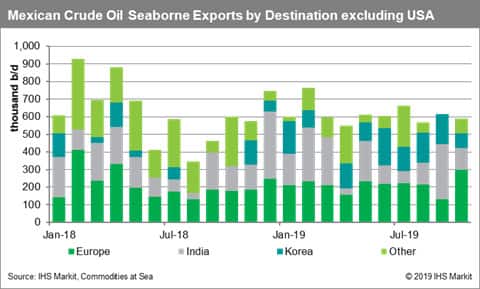 For more information on the movements of the liquid bulk market visit Commodities at Sea.