Crude Oil Trade: Mexico exporting less to the US, but for how long?

Mexican crude oil production has been under severe pressure, with volumes down so far this year. Focusing on each stream's performance, the country has been producing around 1.1 million b/d of Maya, very similar to last year's levels, while production of Isthmus dropped below 500 thousand b/d, from around 600 thousand b/d in early 2018. A similar trend has been observed in the production of Olmeca, which fell from 220 thousand b/d a year ago to around 150 thousand b/d in 2019 Q2. The Maloob field has been responsible for most of the decline so far, bringing overall levels marginally below 1.75 million b/d so far this year.

State oil firm Pemex recently announced that the company's production averaged 1.68 million b/d in June, slightly higher than production of 1.66 million b/d reported in May. The company also expressed its optimism that its production could surpass 1.8 million b/d by the end of this year, with additions coming from several fields currently under development. However, the market seems to be sceptical around the progress so far, with references made regarding the company's debt. Pemex has, however, been denying rumours on facing any difficulties in paying suppliers.

In terms of the trend followed so far in the country's output, decline is expected to last, with volumes most likely to reach 1.7 million b/d by the end of this year. Crude oil liftings heading to India and South Korea have managed to strengthen since March 2019, with Mexican barrels partially replacing Iran and Venezuela. Flows to the United States seem to have declined sharply in June, having been potentially affected by earlier expectations around the US imposing tariffs on Mexican crude oil, while Spain and the rest of Europe continued to import more, with volumes approaching 300 thousand b/d. 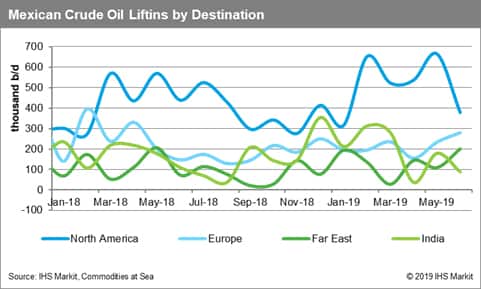 Mexico's role in supplying more to the US to cover lost Venezuelan barrels is expected to last, with flows set to return to normal levels from next month onwards. This assumes that the relationship between the two countries doesn't deteriorate any time soon. However, as Mexico has been focusing on reducing its dependence on US supplies of oil products, an increasing share of the country's crude oil output has been heading to the domestic refining sector.