Concern increases around the future of Libya's crude oil production yet again. There doesn't seem to be any improvement on the horizon. Libya's National Oil Company declared force majeure on exports from major ports. General Haftar, the head of the Libyan National Army, ordered all shipments to be suspended. Meanwhile, there is limited storage capacity left at ports. According to NOC, at least 800,000 b/d of crude have already been halted. The country was earlier pumping up to 1.3 million b/d.

According to IHS Markit Commodities at Sea, Libyan Crude Oil Shipments remain close to 800,000 b/d and could end below last month's levels if activity starts to halt for the rest of the month. Volumes seem to have dropped significantly since September 2019, when the country shipped close to one million b/d. Loadings heading to European destinations, primarily nearby importers in the Med, such as Italy, Spain, France and Greece have dropped almost 3% month-on-month in January, while flows to East, primarily China and other importers across the Far East, currently stand marginally below 300,000 b/d, driven by increased activity in the first half of this month. This is however not expected to cause any dramatic changes in the overall balance, as activity seems to have returned to more normal levels in the second half of this month so far. 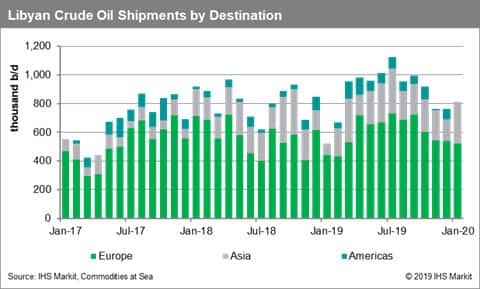 There is no doubt that importers such as Italy could simply avoid suffering the impact in case of a big disruption in Libyan exports. This also explains the big interest by the EU in Libya's transition to more peaceful and safe crude oil operations. Meanwhile, balances remain quite fragile in the region nearby, as Turkey tries to support the Tripoli government, after signing an agreement in November 2019, on maritime boundaries in the Mediterranean Sea, in addition to a deal on security and military cooperation. This agreement has been considered 'arbitrary and illegal' by the EU, with other countries such as Israel and Egypt having expressed their concern and disagreement with Turkey's approach. Ankara looks nervous after Italy fully backed the EastMed natural gas pipeline, an agreement already signed between Egypt, Israel, Greece and Cyprus in early 2019.