For Ancient Greeks, Plutus, the god of wealth, was depicted as a boy in the arms of Eirene, the goddess of peace. It looks like prosperity can only be a gift of peace. And the political instability in Libya proves this is the case.

Last month the country experienced a rather impressive recovery as its crude oil trade quickly picked up after crude oil production in the Sharara field returned close to normal levels. But this is now not expected to last for long, as forces loyal to General Khalifa Haftar that controlled eastern parts of Libya advanced west towards the capital Tripoli, last week. The renewed conflict could very easily escalate and disrupt, yet again, the country's oil production and exports. The self-styled "Libyan National Army" (LNA) is based in the eastern city of Benghazi and is considered the major opponent of the UN-backed Libyan government.

As data provided by IHS Markit's Commodities at Sea suggests, shipments have reached levels last seen in October 2018. Time will show whether the ongoing fighting will have a significant impact. So far, Europe and primarily destinations across the Mediterranean have been absorbing most of Libyan volumes, with a massive increase in market share to report for the first week of April. The rest is heading to the Far East, mainly China, a route which is expected to increase further in future, especially if the country develops the required infrastructure to accommodate VLCCs. In terms of destination, China could start importing much more from Libya, with Unipec having recently fixed some loadings on Suezmaxes. 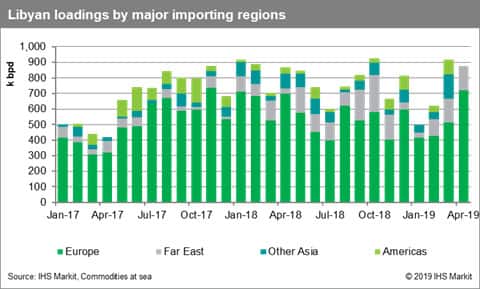 UN Secretary-General António Guterres, who visited Libya expressed his deep concern around a new confrontation in Libya. The country has been struggling for years to maintain its oil production above one million barrels per day (bpd), compared to the record high levels of 1.6 million bpd achieved before the clashes began in 2011. LNA under Haftar controls four of the country's oil ports and the major oil fields nearby, in the eastern side of Libya. With the global supply tightening due to the OPEC+'s cuts, from which Libya is exempted, any disruption further supports stronger oil prices.

Some experts on the region suggest that there should be no immediate impacts on the country's oil infrastructure, primarily focused in the east and south-west of the country. But as LNA moves against the capital, this could mean less resources dedicated to protect its already limited presence in oil producing areas of the Oil Crescent, raising the risk of future disruptions to production.

In response to the crisis in Libya, Algerian Saharan Blend gained ground with May cargoes around North Sea +0.20 or even higher, to an extent supported by uncertainty over supplies from Libya. This unreliability of Libyan loadings added pressure against Es Sider as well. In terms of capacity to feel any future impact, oil fields like the refinery El Sharara and the Mellitah terminal are located close to the country's capital.