With the freight market going through a quiet period, it came as no surprise that there has been no significant change in the freight market over the last week, with earnings for VLCCs remaining flat. MEG to China stands close to WS 37, with a TCE still below USD 7,000 per day. Meanwhile, VLCCs carrying crude from WAFR to China only get USD 12.35 per T or around WS 40, with the TCE at USD 11,050 per day. However, activity is expected to start picking up later this month, which should push rates marginally higher. 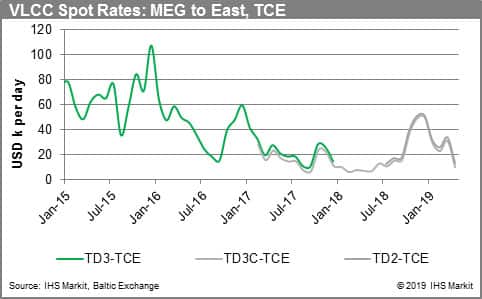 Liftings from the Middle East Gulf to Asia remain under pressure, but the end of the waivers on Iranian sanctions is expected to change the balance across many exporters. Meanwhile, Saudi Arabia and Iraq are expected to further increase their loadings to the US over the next couple of weeks. 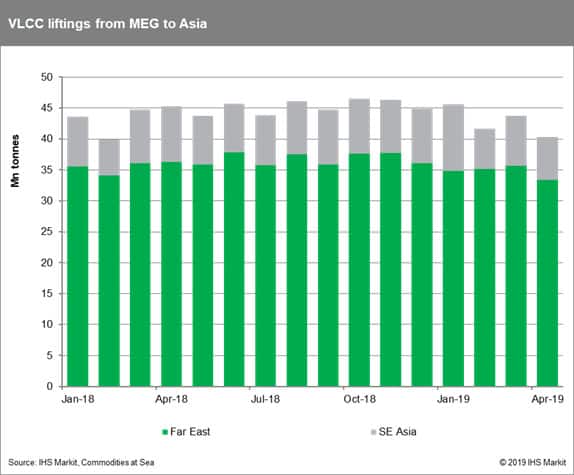 The availability of vessels in the Arabian Sea seems to be stabilising in favour of vessel owners, as the following chart suggests. We only see 46 VLCC fixtures for Middle-East Gulf loadings for the first decade of May, while the second one has already reached 42 fixed shipments. A similar path followed in West Africa for VLCCs, with May's third decade already standing at 14 fixtures, higher than the ten loadings fixed for this month's second decade. At least 16 VLCCs are fixed to pick up cargo from the Caribs between 21st - 31st May, with the market already discussing June's activity. 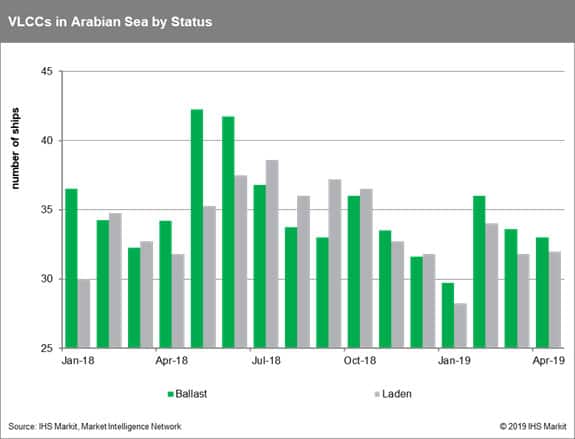 Moving to Suezmaxes, recent requirements only represent slightly more than a third of the available candidates on major routes, adding more downward pressure on freight rates. In the Mediterranean, activity has been limited, with any new cargoes only absorbing a small part of the available tonnage. In the rest of the Continent, the situation still looks poor, but a change might not be far away as the WAFR programme is expected to improve fast as we approach the end of the month. 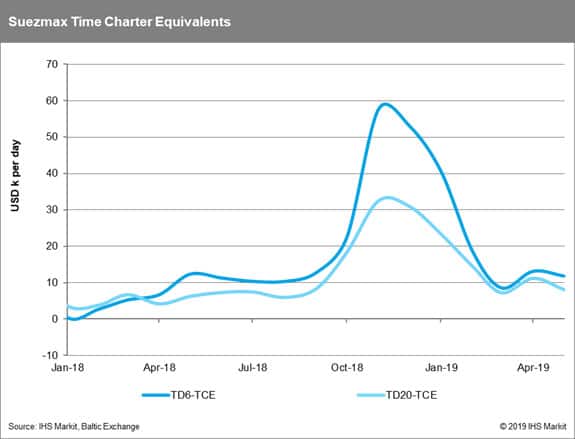 There is some hope that US loadings might start increasing once again, which could push some VLCC to ballast across the Atlantic. This could provide some support to Suezmax rates.

Focusing on Aframaxes in the Baltic and the North Sea, last week has been positive, with some recovery to notice driven by a tighter list. This was caused by the rather busy Rebco programme out of Primorsk, which will cover at least 26 cargoes alone. Uncertainty around crude out of Ust-Luga could further support owners, due to the tightening of the vessel list.

Owners already look stronger in the Mediterranean and the Black Sea, with WS 80 ex-Libya already achieved while ex-CPC stands at WS 90. We expect that owners will try to push rates even higher if cargoes keep on being added. The Aframax market looks rather healthy for now, as sentiment in most regions has been improving.