It seems Kuwait has been very active in taking measures to improve conditions in favour of its oil industry, in an effort to strengthen its position in the global market. Its relations with Iraq seem to be improving, with the two sides looking ready to resolve any outstanding issues. First steps have already been taken, after they both agreed to explore opportunities for new oil fields on their border. The two nations signed a contract with a company to prepare technical and reservoir studies on two fields, Rumaila South Rataqa and Safwan Al Abdali. 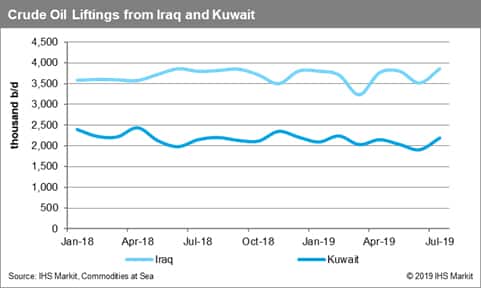 Meanwhile, Kuwait has been negotiating a contract renewal with Egypt, which could result in doubling volumes of crude oil imported by Egypt, with further adjustments to the merit rating scale. According to data by IHS Markit Commodities at Sea, Egypt has been importing around 100,000 b/d of crude oil from Kuwait. Upon contract's expiry, this could reach 200,000 b/d. 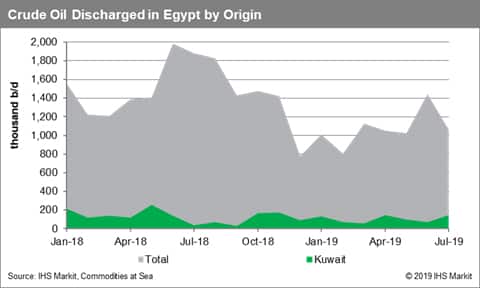 Kuwait has been primarily exporting to countries across the Far East and India, with some of these importers having increased their exposure to barrels from other Middle Eastern producers after the end of waivers on Iranian sanctions. For Kuwait, Japan has become interested in absorbing more, with trade flows having increased around 17% during the first seven months of 2019, year-on-year. Kuwait has exported almost 13% of this year's volumes to Japan, much higher than the same period last year, when 10% of its exports ended in Japan. 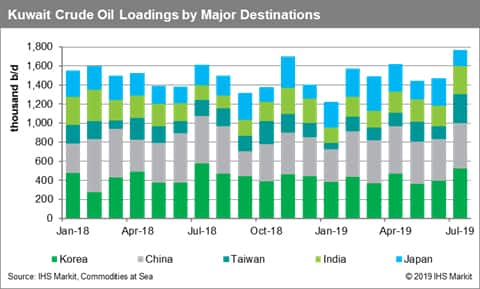 Kuwait's strategy also involves launching new grades to the market, with a new heavy sour crude oil grade expected by the end of Q3 2019, which will primarily target Asian importers. The crude grade is understood to have an API of 16 and sulphur content of around 4.9%. It will be produced by Lower Fars and Umm Niga fields, with current capacity standing at 60,000 b/d.

Kuwait Petroleum Corporation (KPC) plans to offer this new grade initially to existing customers, with Indian refiners expected to be very interested, these barrels are very similar to those previously imported from Iran. KPC intends to introduce another grade, this time a medium heavy one, with production from the Rawdatain field.

Progress is on track for Kuwait to meet its long-term plans of increasing overall production capacity to four million b/d. More than a tenth of this will come from the Partitioned Neutral Zone, shared with Saudi Arabia. Discussion recently restarted, about the offshore Khafji field and the onshore Wafra field, jointly owned by the two countries. Total production rate approached 500,000 b/d in the past, but has been offline since May 2015.