Kuwait is understood to be considering a reduction in its oil production capacity targets. OPEC's fourth biggest producer may reduce its long-standing goals of reaching four million b/d by 2020, driven by the globally increasing concern on climate change. Kuwait Petroleum Corporation (KPC) currently has a capacity of about three million b/d and now only targets 3.125 million b/d. The revision is also linked to delays in the country's oil projects, as KPC is rumoured to be facing difficulties in exploiting hard-to-reach deposits due to a lack of expertise, after already pumping most of its easily accessible oil. This change in targets by an OPEC member would be the first to be based on environmental issues. KPC is also considering cutting its 2040 capacity target to four million b/d, from 4.75 million b/d.

In parallel to OPEC production cuts, Kuwait's output of crude oil currently stands below 2.7 million b/d, after peaking at 2.96 million b/d in 2016. The Middle Eastern producer's capacity targets include its share in the "Neutral Zone" shared with Saudi Arabia. The region hasn't produced anything for at least four years, partly due to disputes between the two countries, with capacity to produce as much as 500,000 b/d. Kuwait and Saudi Arabia have been in talks to restart oil production from the jointly-operated Neutral Zone, with the two Gulf oil producers having recently agreed to resume crude output from the divided zone. But this would take months and would only commence after a deal gets finalised.

Kuwait increased its loadings on ships in October, with shipments surpassing two million b/d, with a growth of 7.3% to report since September, according to data by IHS Markit Commodities at Sea. In terms of importers of barrels from Kuwait, Korea's appetite has increased since last month, having reached 480,000 b/d, with average flows since early 2019 standing at 425,000 b/d. The rest of the Far Eastern importers have increased their volumes, with most additions recently coming from Taiwan. Shipments to India have been increasing as well, while less has been loaded with destinations across South East Asia. 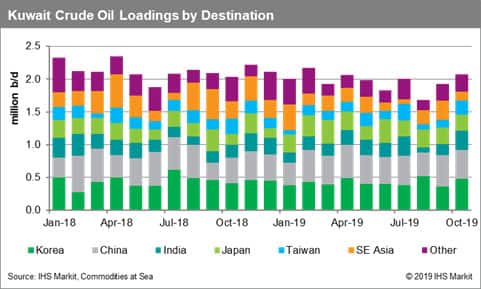