According to data by IHS Markit's Commodities at Sea, Venezuelan crude oil loadings in June were around 870 thousand b/d. This suggests that activity recovered month-on-month, however, the year-on-year decline stabilized at rather high levels. During the first half of 2019, Venezuela's liftings dropped by 28%. The collapse is expected to last throughout the second half of the year, with July's levels so far standing much lower than June. 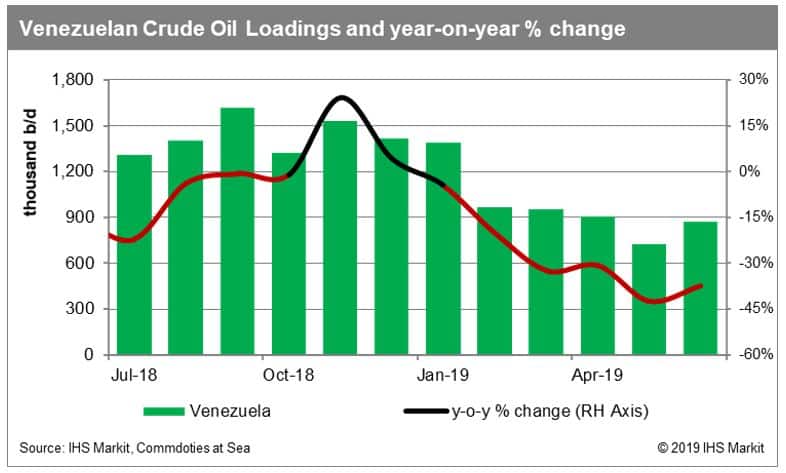 The recovery in June, compared to May, reflects the ability of Venezuela to load part of its inventory which has reached new historical highs during the last couple months. Inventory has been increasing due to the US oil sanctions and earlier problems faced at terminals related to lack of electricity. Since February, over 75% of the country's shipments have been heading to Asia.; primarily to China and India, with a small percentage ending up in storage facilities in Southeast Asia. 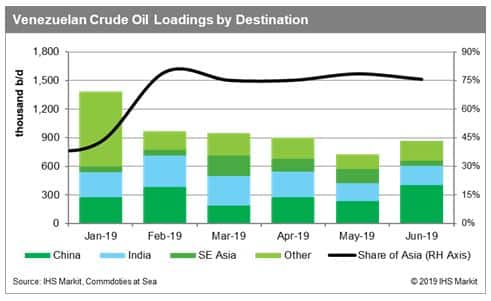 The United States had imported around 500 thousand b/d of Venezuelan barrels in 2018, which represented more than a third of Venezuela's exports. However, activity quickly reached zero since late January of this year. 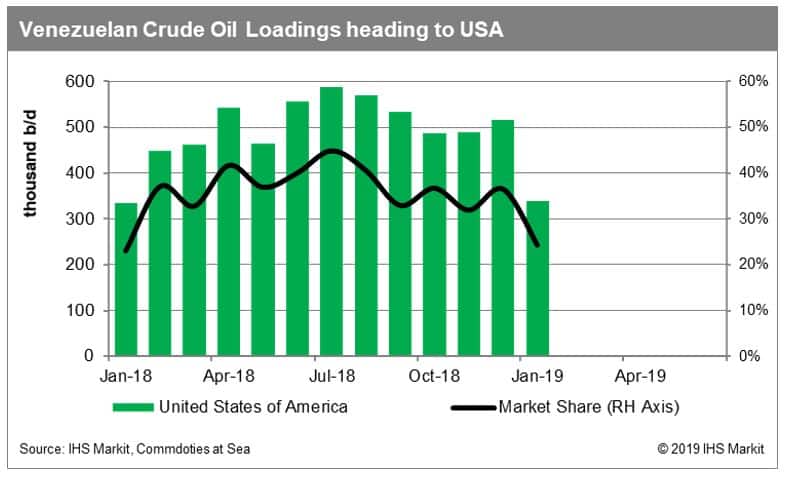 Venezuela's production might have already reached its lowest, as foreign partners of the state company PDVSA have been supporting output to rebound. Companies such as Chevron, Rosneft, CNPC and Repsol have joint ventures that are still in place despite the US sanctions. Chevron still has a sanctions waiver which will expire on 27 July. The US administration will decide whether this will be renewed or not, which will define the future of Venezuelan production.

Chevron has been active in Venezuela for almost a century and together with PDVSA currently produce about 200 thousand b/d, about a quarter of the country's total production. These volumes are threatened in case the US government declines to renew Chevron's waivers. The decision won't be easy for Washington since the departure of Chevron could be followed by Russian or Chinese companies taking over local oil fields.

Meanwhile, PDVSA is believed to have been loading some crude on ships switching off signals, with some of the volumes ending in Turkey and Cuba.

Elsewhere, China has been refusing to recognise Guaido's presidency and continues to support Maduro and his government. It will be interesting to see if anything will change in the near future. Guaido has promised to protect Beijing's interests and investments better than the Chavistas, with new financial incentives to be given to China.