In parallel to the trade war between Washington and Beijing, the global oil market will likely need to adjust once again, as President Trump prepares to take action on another country. The US was importing around 570 thousand b/d from Mexico during the first five months of the year. However, this could decline sharply due to the five per cent tariff that the Trump Administration plans to apply to all Mexican imports from 10 June. This measure, announced last week by President Trump, comes as a response to the limited effort by the Mexican government, according to him, to tackle illegal immigration. By October, the tariff could rise to 25 per cent. 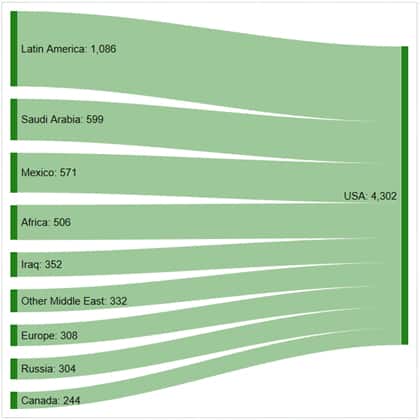 Several Aframaxes have been employed to carry Mexican crude oil to the US coast, as US refineries have been relying on their neighbours to supply heavy crude instead of absorbing domestically produced light grades. Replacing Mexican grades to avoid the tariffs might prove a challenging task, especially supply by alternative sources has been tight, since the Venezuelan sanctions imposed earlier this year. Other South American producers, such as Colombia, Brazil, Ecuador and Argentina, are expected to further strengthen their market share in US imports. Additions in Brazilian supply over the next couple of years could allow the US to fill part of the gap quickly, with blends like Lula and Buzios dominating the interest of US refiners, together with Colombian Castilla. However, the rest of the global market has been increasingly interested in those grades, having pushed differentials for these grades much higher during the last couple of months. Other exporting regions, such as the Middle East Gulf and North Sea could take advantage of this situation as well. 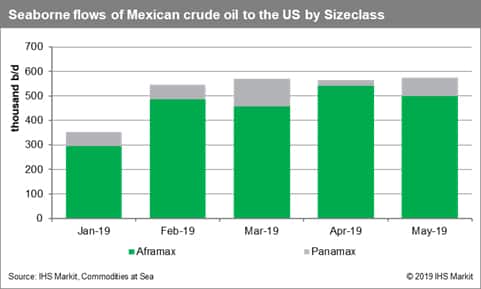 Focusing on Mexico, the country's output will have to target new buyers for its crude oil barrels, with importers across the Far East considered the most likely scenario. This could be great news for the shipping sector, as demand could be quickly boosted in terms of tonne-miles, once flows from Mexico to the Far East start increasing. Meanwhile, crude oil imported to the US would have to cover much longer distances as well. The most probable scenario would be primarily VLCCs to feel the beneficial impact of these latest tariffs by the Trump administration. Expect to see much more voyages from the Caribs (Mexican coast) with longer distances to be covered to the Far East.

In parallel to the changes anticipated in crude oil trade flows, the market is expecting the response by the Mexican President as well, as his country has been heavily relying on oil products imported from US refineries. Mexico has been absorbing more than a quarter of the US refineries' output, with imports standing close to 1.15 million b/d. The Mexican government has been promising to develop the country's energy sector targeting to rely significantly less on foreign countries. The President recently announced plans to start the construction of Mexico's first oil refinery in four decades.