Crude Oil Trade: Iraq production on the up as UAE question deeper cuts

With OPEC increasing its output and exports in August, the big topic in the market has been what to expect as the cartel's next meeting is approaching. Officials from nine key OPEC and OPEC+ producers will meet on the 12th September during the World Energy Congress in Abu Dhabi. Oil prices have been volatile during the last couple of weeks, but still stand at a low USD 60s per barrel, despite OPEC having cut production to a five-year low.

All eyes have been on Iraq, OPEC's second-largest oil producer. Its production reached record highs in August, having surpassed 4.8 million b/d since July. Additions by Iraq are believed to have been enough to drive OPEC's first monthly output rise in 2019. This must have caused a headache across OPEC, especially Saudi Arabia, as other producers might consider following Iraq's example.

Balancing the market hasn't proved very successful so far, while expectations that demand growth will be under pressure in the near-term creates more scepticism around more production cuts. It'll be difficult for negotiations to proceed while Iranian exports fall in favour of production from Iraq.

Iraq's recovery has been rather impressive, with the country's output having expanded from below three million b/d five years ago to almost five million b/d by the end of 2019. Exports have averaged around 3.65 million b/d so far in 2019. Most additions in Iraq have come from the country's southern oilfields, as its north still faces political disputes with the Kurdish regional government.

The country doesn't seem to be enforcing compliance production quotas, even if Saudi Arabia has repeatedly addressed this to Iraq. Only time will tell if the country is already nearing its production capacity or if production could increase further. However, as Iraq's infrastructure is outdated, the country has to attract foreign partners to ensure current levels of production. 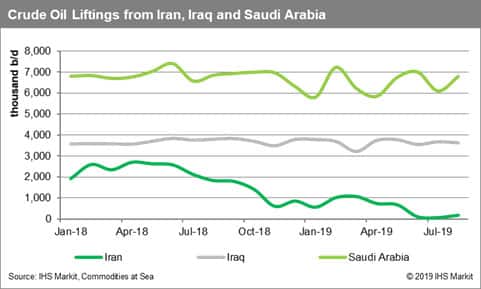 Meanwhile it's not only Iraq that is looking determined to push OPEC's production even lower. UAE energy minister, Suhail al-Mazrouei, commented recently against any deeper OPEC production cuts ahead of OPEC+ committee's meeting. His argument was built mainly around trade tensions and the potential impact on oil demand. "Oil market is not only affected by supply and demand, it's the main thing we can control, but there are geopolitical effects, concerns about trade tension especially between major economies like US and China.", Mazrouei said.