Shipments of crude oil from Iraq have been increasing in September. Volumes currently surpass 3.7 million b/d, as shown by data from IHS Markit Commodities at Sea. Flows to China have been increasing month-on-month since June, with September's levels currently standing above one million b/d, which hasn't been surpassed since February 2019. Iraq is still believed to have spare capacity to utilise, with new record production levels achieved in August. Even during geopolitical tension, the country increased its crude oil output establishing more optimism for the potential of the country's state-run fields. Last month's production reached 4.97 million b/d, including output of the autonomous Kurdistan Regional Government (KRG). Iraq has had one of the four operational single point moorings (SPM) at Basrah down for maintenance for more than a month, which is expected to come back online soon. 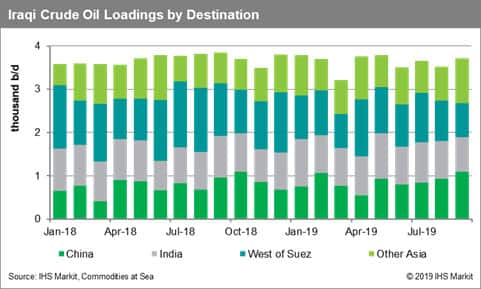 Meanwhile, officials of both SOMO and Aramco have denied that Saudi Arabia had asked Iraq for any crude supplies for its domestic refineries. Saudi Aramco plans to restore lost oil production by the end of September, having managed to supply customers prior to the attacks by drawing on its oil inventories. According to recent reports, the company has already restored around 40% of the affected production capacity.

Elsewhere, Baghdad has been negotiating with Ankara for the construction of a new oil pipeline with the capacity to transport one million b/d from Iraq's Kirkuk fields to the Turkish border. Iraq's Ministry of Oil has commented that construction will probably get underway in 2020. Current flows via the existing but damaged line from Kirkuk to Turkey's Ceyhan port on the Mediterranean Sea don't exceed 150 thousand b/d. Iraq wants to focus on exporting more to the Mediterranean ports, to diversify export outlets while ensuring continuous oil flow to global markets. European importers have been increasingly interested in barrels from Iraq, since the US sanctions on Iran have been in place. Restoring the old pipeline which has been badly damaged during fighting with the Kurds wouldn't prove enough to cover the increasing demand for Iraq's barrels. The new pipeline will allow requirements of other countries to be met as well, as it will export crude oil not just from Kirkuk in the north, but Iraq's central and southern fields as well. The country will be then flexible to export oil to global markets.

Iraq has also tried to attract more Chinese companies to the South Iraq Integrated Project (SIIP), one of the biggest oil infrastructure projects in the region. Apart from PetroChina which has been involved since 2015, other Chinese majors such as China National Offshore Oil Corp. (CNOOC) and Sinopec are now looking to participate. Exxon Mobil has been sceptical, having publicly expressed its concerns and doubts. It's believed that Iraq is trying to push the American oil major towards an agreement by approaching other companies as a backup.