Crude Oil Trade: Iran after the end of waivers

Since early May, all US waivers on Iranian barrels came to an end, but the big question is whether and how many Iranian barrels reach their destination and what could follow in the near future.

China seems to be still active in importing Iranian crude, including volumes from Malaysian storage, originally loaded in April. Storage is climbing yet again, with total volumes estimated to have approached 50 MMbbl. Some of the shipments we've recently observed obviously violate US sanctions against Iran after the end of waivers. Ship-to-ship transfer of the cargo offshore seems to be rather popular in an effort to present some of these volumes as Iraqi oil to evade sanctions. As tension between Washington and Beijing further increases, China continues to ignore US crude oil by only importing minor volumes from the US Gulf. Demand remains quite strong and healthy, with the country's refinery throughput having reached new record-high levels in April. Chinese officials have made it clear that the country is not willing to comply with US sanctions against Iran. However, major refiners such as CNPC and Sinopec, have suspended orders for Iranian crude. 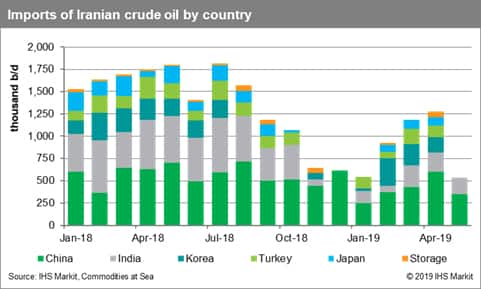 It's very interesting that China hasn't yet imposed any tariffs on US oil, despite the growing tension between the two countries. Beijing doesn't seem ready to proceed, as this would limit the country's sources for crude oil, during a period when global supply looks rather tight, with OPEC+ production cuts still in place. At the same time, China's appetite for crude oil has consistently been very healthy, having surpassed ten million b/d since November 2018. However, uncertainty driven by the trade war against the US has been pushing Chinese purchases to lower levels. For now, we can be confident that flows from Iran to China will continue.

Focusing on India, it seems that the country has halted all oil imports from Iran, after two vessels carrying Iranian crude oil discharged cargo in the country earlier this month. These volumes were carried by the last two vessels that loaded Iranian barrels with destination India in late April. The "HENNA" and the "DINO I", both controlled by NITC, discharged Light Sour in Paradip and Cochin accordingly earlier in May. After Prime Minister Narendra Modi won the recent elections, officials in the country have made it clear that India is not importing from Iran any more, but also highlighted how these sanctions have hurt the country's energy sector, which had been heavily relying on Iran for a sizeable chunk of its crude oil. New alternative suppliers of crude oil have already been sourced after the US refused to extend the waiver, but with a significant cost for India to cover.

India, which has been importing around 300 thousand b/d from Iran was asking the US for another sanction waiver, which was declined. India is currently in full compliance with the US sanctions on Iran, but with the elections finished, the question is whether the country may once again resume oil purchases from Iran.

The market expected to still see some activity from Iran to India, even after the end of the US waivers, since no other crude oil supplier would be willing to compete with the cheaper Iranian oil. India has been getting around 10% of its imports from Iran before the US sanctions, having been Iran's second largest oil customer. The share fell to significantly lower levels since November 2018 but remained quite significant for India overall. Alternative suppliers Iraq, Saudi Arabia and Nigeria seem to have increased their exports to India since the beginning of this month, quickly replacing Iran, but without doubt at a much higher cost. 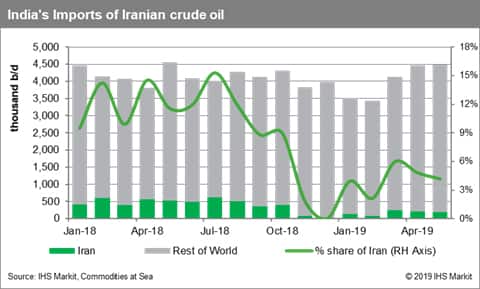