With the country's crude oil output under pressure, India has been increasingly dependent on imported barrels to meet domestic requirements. Volumes internally produced, has dropped by around 7% so far in 2019 year-on-year, pushing the ratio of imports vs total consumption above 85% from below 84% a year ago. Policy reforms and initiatives taken haven't proved enough to support India's output, making the country vulnerable to geopolitics. India has been struggling during the last couple of years, with huge losses suffered, as the weakening Rupee has been affecting trade balances. New Delhi has been trying to cut oil import dependence, with PM Modi having set a target of 10% in 2015, the ratio of imports only stood at 77% back then. The country's oil minister Dharmendra Pradhan recently commented that state-owned oil companies should boost overseas borrowings, instead of relying on traditional domestic routes. The local economy is expected to grow at 7%.

Focusing on imports, India's largest oil refinery considers cutting crude capacity, to reduce costs which has already reached USD 60 billion, having surpassed by far initial plans for USD 44 billion. India has been planning to build the massive refinery in Maharashtra, on the West Coast, together with state oil companies of Saudi Arabia and the UAE. A year has passed since Saudi Aramco and the Abu Dhabi National Oil Company (ADNOC) signed a deal to jointly own 50% of the new joint venture company RRPCL, while the other half will be held by Indian national oil companies. This project would allow Saudi Arabia and the UAE to strengthen their market share in the fast-growing oil market of India. However, strict environmental regulations requiring expensive technology will cost a lot more than initially expected. Costs also increased due to delayed land acquisition, as opposition from local farmers has been strong, so much so the site had to be relocated.

Moving to the country's demand for oil products, levels are expected to be quite healthy in the second half of 2019, with a recovery on the horizon. Now that elections are over, the government is determined to support most major sectors to aid recovery. Volumes were down about 1% year-on-year between January and June 2019, primarily driven by a slowdown in auto demand. However, optimism has risen as the central bank decided to loosen the monetary policy and cut interest rates, which will support the market. Oil demand will start picking up year-on-year in H2 2019.

Focusing on India's crude oil imports, as shown by IHS Markit Commodities at Sea, volumes have remained unchanged in July, after declining 4% month-on-month in May and June. Volumes so far in 2019 have been down around 3.3% year-on-year, but a recovery is expected in the second half of this year. Major exporters in the Middle East Gulf and West Africa continue to dominate the Indian market, but it's interesting to note that flows from American exporters, including USA, Mexico and Venezuela, remain strong and stable. 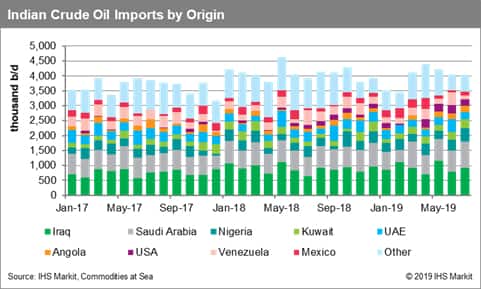