Crude Oil Trade: Indian imports recovering fast, while trade with the US will strengthen further

Trade flows from the US to India are expected to flourish further, especially as New Delhi is trying to reduce its reliance on OPEC suppliers and eliminate the country's exposure to the potential instability across major oil exporting regions such as the Middle East Gulf and West Africa due to geopolitics. Meanwhile, India's increasing appetite for energy in combination with the additional production coming from the US creates good opportunities and motivation for both countries to further develop trade with each other. Crude oil trade flows have increased by 105% year-on-year between January and October 2019, based on data by IHS Markit Commodities at Sea. 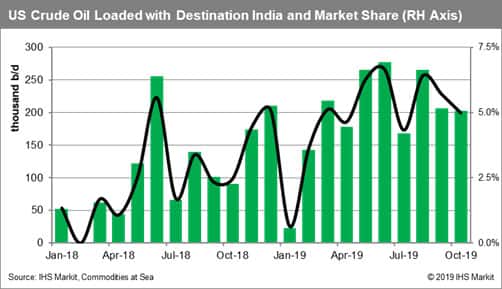 The strategic energy partnership agreement signed by both countries in 2016 was only the beginning of a relationship that could last, covering both oil and gas. With the Middle East Gulf accounting for almost 66% of Indian imports of crude oil, instability in the region could be a big threat for supplies heading to India. New Delhi understands that the country's buyers cannot deal with drastically higher oil prices or cost of transport if anything doesn't go according to plan. The US had a market share below 2% in Indian imports last year, with its share now standing above 5% so far in 2019.

Focusing on fuel oil, demand in India has reached a record low, at least for the last two years, in September, in parallel to a significant increase in LPG consumption. Demand for diesel is estimated to have dropped by more than 3%. Meanwhile, LPG consumption is understood to have expanded by 6%, with the government having been pushing in favour of this cleaner fuel in household kitchens to reduce pollution. It has been mainly kerosene getting replaced by LPG as a cooking medium. Growth of car sales has been recently recovering, with the trend expected to last throughout 2020, even if reaching levels achieved in 2018 is still considered rather difficult.