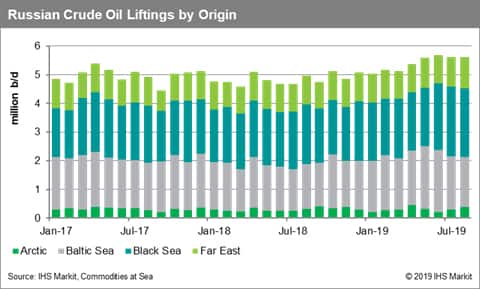 Total volumes of crude oil liftings from Russia have been marginally down in July and August, as the decline reached 1.2% since June, however a new trend has developed for Russian exports. Baltic Sea seaborne exports have been slowing down quickly, with year-on-year remaining positive, but with losses to report month-on-month since June. Levels in August stand at 1,750,000 b/d, down around 435,000 b/d from the highest achieved earlier this year (May/June). This is a drop of 20% so far, as shown in the chart below from IHS Markit Commodities at Sea. 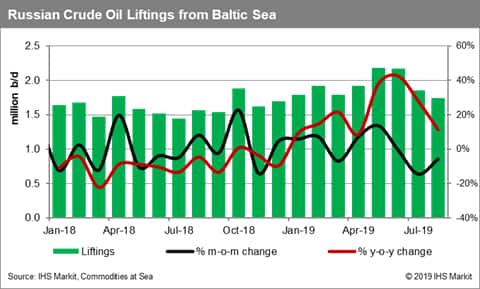 Performance has been much better in the Black Sea, with volumes remaining above 2,000,000 b/d during the last three months. The average liftings since early June currently stand at 2,370,000 b/d, almost 17% up compared to volumes exported daily between January and May 2019, with additions having reached 350,000 b/d. 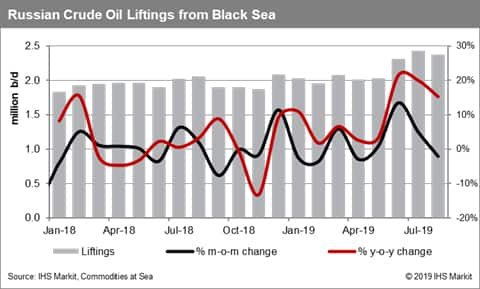 There is a minor increase to report in volumes lifted from Russian Far East during the last couple of months as well, but with current levels close to this year's average so far, marginally above 1,000,000 b/d. Competition for grades exported from the region has been much higher this year, primarily due to the further expansion of US production and exports. 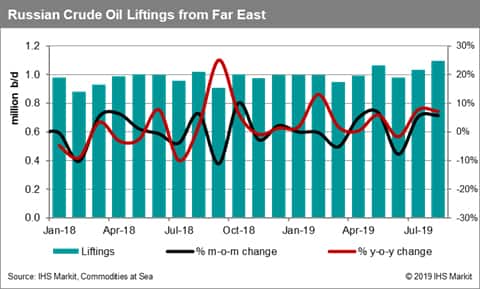 In terms of destinations, there hasn't been any significant changes so far, with European importers still absorbing most of the barrels coming from Baltic and Black Sea, while China, South Korea and Japan continue importing most of Russian Far Eastern barrels.

Elsewhere, after a bankruptcy declared earlier this year, Russia's biggest independent oil refinery went through some severe restructuring and resumed operations last month. The Antipinsky Refinery now plans to double its production month-on-month. Up to 550,000 tons of crude oil will be processed in August, more than double the 200,000 tons of crude it processed in July. This is the only oil-processing plant in the Tyumen region and Ural Federal District. The main creditor of the refinery, Sberbank, a joint venture between SOCAR Energoresurs and SOCAR, has recently acquired 80% of the refinery. Processing capacity currently stands marginally above 180,000 b/d.