Crude Oil Trade: If China avoids US oil in 2020, will Saudi Arabia step in?

With the trade war between China and the US escalating and with tariffs now in effect, it comes as no real surprise that oil prices have been declining this week. The big question remains what to expect from next week's meeting of OPEC members. The oil industry may start looking beyond Saudi Arabia's control, but any announcement could cause more price movements in the short-term.

Meanwhile, all eyes are now on China. The country's imports of US crude oil decreased in Q3 2018, long before the new tariffs. But the latter is rather significant, as China is now not expected to rely on US volumes in 2020, when requirements for light grades are set to boom. Beijing will have to source from elsewhere, while Riyadh will have to decide in favour or not for its most important client. 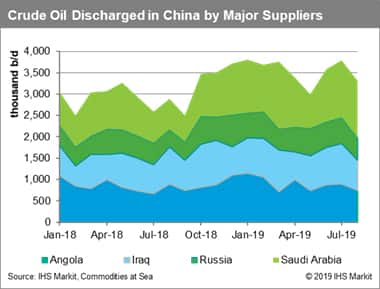 Saudi Arabia's market share in Chinese imports has improved significantly this year, bringing the country back to the top in the list of seaborne crude oil suppliers, while Saudi Arabia recently surpassed Russia in overall flows to China. As Russia typically produces heavier crude oil grades, this trend is expected to last.

As Iran and Venezuela are not expected to recover any time soon due to US sanctions, there are not many options left for China. The anticipated growth in Chinese demand for light crude could be easily satisfied by Saudi Arabia, if the Middle Eastern producer decides to support China's requirements.

Saudi Arabia has been producing around 500,000 b/d below its commitment. With IMO 2020 approaching soon, Chinese refineries will accelerate their production of LSFO. If the kingdom gets tempted to increase output, this could push oil prices much lower. The domino effect would then be felt on US production, with several companies already prioritising the improvement of operations instead of further production growth for next year.