Crude Oil Trade: High uncertainty around the future of OPEC+

With around six weeks left until the next meeting of OPEC+ countries, Russia doesn't appear to be reducing its output and exports. The country is now most likely not looking to renew its participation in the supply agreement. The strategy that Moscow will follow cannot be foreseen as signals sent so far and comments recently made by officials only allow the market to guess what could follow, with sentiment having changed over and over during the last couple of months. However, we should consider that seaborne flows from Russia might strengthen as a response to higher uncertainty around the country's oil supplies to Europe via the Druzhba pipeline. 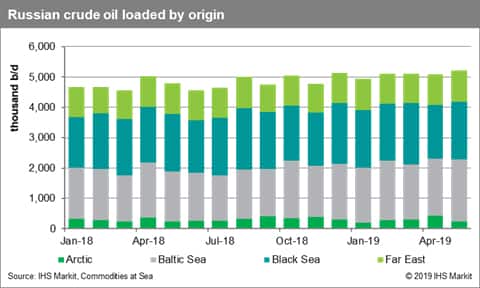 Data made available by IHS Markit's Commodities at Sea, is clear, Russia has been loading around 2.6% more so far in May than a month ago. Meanwhile, the country has been famous for keeping its cards very close to chest. And it doesn't seem to be the only one doing so, as uncertainty seems popular among OPEC members as well. Since the US decided to end all sanction waivers on Iranian barrels, the cartel is now facing an important milestone for the year. The market must adjust quickly as demand remains quite healthy and strong, with some of the major importers, such as China, India, Japan and South Korea, looking for the best replacement in such a tight market. The gap to be created is not yet clear, as some Iranian barrels are still in transit, with the impact to become clearer once we approach June. It will then become obvious exactly how much supply has been lost, with Saudi Arabia and potentially the United Arab Emirates having to step in to offset any shortages.

Saudi Arabia continues to ensure the market how flexible and ready it is to meet any future requirements, even if the country still prioritises working "towards market stability". Officials have been commenting that the country won't rush in to ramping up production, but loadings during the first ten days of May have already increased significantly. Liftings have surpassed seven million barrels per day for the first time since Q4 2018.

Focusing on Russia, Finance Minister Anton Siluanov said that OPEC and Russia might focus on fighting for market share against the US, which would probably require them to abandon the OPEC+ deal, pushing oil prices much lower. This won't be that dramatic for most Russian oil companies, who continue to press the government against any future output cuts, as they would benefit from higher oil production, as long as oil prices remain above USD 55 per barrel. Increasing production is essential for some of the country's companies planning to develop new oil fields and minimise declines from maturing fields, primarily across the Urals region.