After the US oil boom, Canada, together with Brazil, is another country whose production will expand dramatically over the next decade. The North-American country accounts for around 25% of new crude oil supply to be added globally through 2050. New pipeline projects have so far faced significant delays, primarily due to environmental concerns and regulatory obstacles. Canada's proven oil reserves are estimated close to 170 billion barrels, coming third globally to Saudi Arabia and Venezuela. Since Canada's domestic needs are only expected to grow slowly, exports will only continue to grow, assuming that the required infrastructure will be built along the western coast. Canada's exports to the US have reached 4.7 million b/d, with its heavier sour barrels remaining quite popular across US refiners, especially during periods of fast-declining output across other traditional suppliers to the US, such as Venezuela and Mexico.

However, Canadian oil still faces some major challenges before further expanding. The increasing sense of uncertainty and the political scene heavily focusing on climate action could prove enough to affect drilling activity in 2020 and beyond. Some exploration and production companies have now avoided reinvesting in Canada, while energy giant Encana recently decided to move its HQ from Calgary to the US. The Petroleum Services Association of Canada now expects a total of 4,500 wells to be drilled in Canada in 2020, down from 5,000 wells this year and 6,950 in 2018. The association's estimate a year ago suggested that 6,600 wells would have been drilled this year.

Focusing on Canadian seaborne exports of crude oil, activity seems to have recovered quickly in October, after a sharp decline observed in September. According to IHS Markit Commodities at Sea, shipments reached almost 350,000 b/d, with around 290,000 b/d of Canadian crude oil heading to the US. Flows to Europe and other importers remained at low levels. 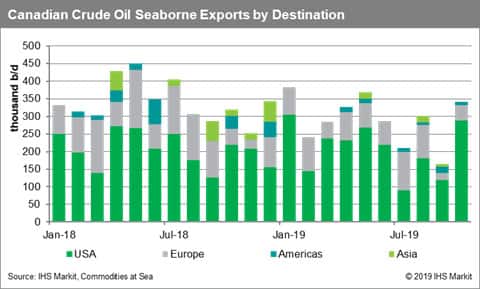 Meanwhile, Canadian pipeline operator Enbridge managed to keep the Line 5 crude oil pipeline running, passing under the Straits of Mackinac, after a state court ruled in favour of the Canadian company. Enbridge had previously agreed to pay between USD 350 and 500 million for the construction of a tunnel for the pipeline in the Straits of Mackinac, a project which could take up to ten years to complete.

Elsewhere, TC Energy's Keystone pipeline leaked an estimated 383,000 gallons of oil in North Dakota. The pipeline carrying tar sands oil from Canada through seven states was shut down after the leak was discovered. The company has been seeking to build the USD eight billion Keystone XL pipeline that would carry tar sands oil from Alberta to refineries in Texas. The proposal has been facing opposition due to environmental concern. The Obama administration previously rejected the expansion, before President Donald Trump issued a federal permit in 2017. This is not the first spill for this pipeline. There was another major leak of more than 14,000 gallons of oil in south-eastern North Dakota in 2011. More recently, the pipeline leaked around 407,000 gallons of oil onto farmland in north-eastern South Dakota, in 2017.