Crude Oil Trade: Flows from the US to South Korea, trade partners by choice

South Korea's appetite for sweet crude oil grades has been strengthening since late 2018, with the Far Eastern importer favouring imports from the US and North Sea over Middle Eastern sour crude oil barrels. The trade war between Washington and Beijing allowed the country to step in and absorb much more since the fourth quarter last year. Meanwhile, the trend is expected to get further supported by the ongoing geopolitical tensions in the Middle Eastern Gulf and OPEC+'s extended agreement to keep output limited. As Saudi Arabia will continue focusing on improving its market share in Chinese imports, South Korea will continue to rely on US crude oil and light sweet North Sea crude, at least over the next nine months.

With concerns around trade flows through the Straits of Hormuz and the risk of future disruptions rising, securing more sources from the US and Europe seems to make sense for South Korean refiners. Imports from the Middle East have been dropping since April, when the country received the last Iranian barrels. Imports from the Middle East have declined 8.4% in H1 2019, year-on-year. Flows from the Americas has increased around 28% since H2 2018, with the year-on-year growth reaching almost 95%. 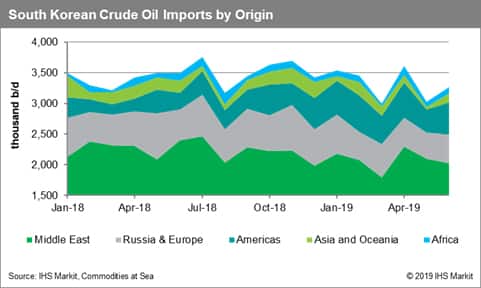 The US-South Korea route is expected to further flourish, at the expense of Middle Eastern sour crude oil barrels. The price differentials established support the trend, with local companies having commented that they might further cut imports of crude from the Middle East. Elsewhere, South Korean refiners returned their focus on barrels of Forties crude from the UK during Q2 2019, after a long pause since December 2018. Market conditions have been improved since Seoul decided to extend freight incentives which is expected to support flows of the North Sea crude grades by the end of the year. These freight incentives granted to refiners buying from regions other than the Middle East will last till the end of 2021. The measure proved strong enough for the country to reduce its reliance on Middle Eastern crude. Apart from the US, shipments from Africa have increased as well, with year-on-year growth having reached 7.5% so far in H1 2019.