Crude Oil Trade: Falling one after the other, Algeria might be next OPEC member with fragile production

It didn't take long after the positive news on Libya, with production of the country's major oil field expected to fully recover by end of this month, and we now have another Maghreb country feeling the pressure of political instability. The latter could translate into significant challenges for the local oil industry and involuntary declines in the near term.

Protests recently began in opposition to President Abdelaziz Bouteflika running for a fifth term in office in next month's elections and then after his announcement to withdraw while pushing elections for later this year, for a new constitution to be drafted by then. Focusing on the country's oil infrastructure, most oil fields are located deep inland, far from the major towns along the sea coast, where the protests take place. But meanwhile, it's ports next to these urban centres export more than 90% of the country's oil, primarily to countries across Europe. The continent's refiners have been absorbing large volumes of Algerian light, sweet crude and condensate, with the UK and France dominating the trade. This might be another opportunity for US cargo, which could fill any gap created in the future, but the distance would be much longer, up to ten times as far. 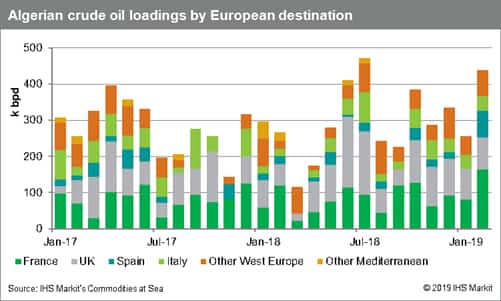 In parallel to that, the country's national oil company, Sonatrach, recently announced its plans to commence offshore drilling on the eastern coast, between Bejaia and Skikda, in the second half of 2019. Oil is believed to be contained on the western coast, with several million barrels to be drilled from the first wells, with TOTAL and ENI already carrying out prospects in the region. There is significant potential, but only assuming political stability remains for the long term. Algerian production reached almost 1.4 million barrels per day in 2008 but dropped closer to one million bpd during last year. All new fields could increase output in the early 2020s but are set to decline quickly after without any other significant new finds. Oil and gas represent 95% of the country's total exports.

The question now is whether a new president would be good or bad news for the country's oil industry. This might cause some delays in energy reforms considered essential to encourage new investment. Algeria hasn't been as successful as other African countries such as Egypt and Angola in creating an appealing scenario for rather selective foreign investment companies. But Bouteflika's withdrawal might mean more uncertainty, especially if big protests last for long. 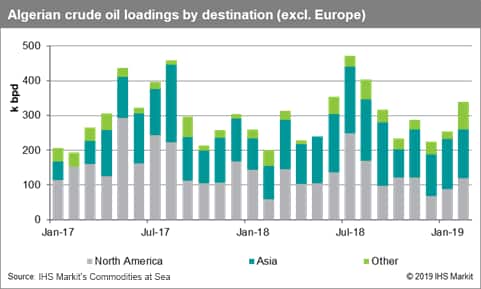