European importers' appetite for West African crude oil barrels seems to be quite strong lately. Nigeria's Egina, one of the newest oil grades exported, has been proving very popular across the continent. Barrels of this medium-sweet crude oil have been appealing to refiners primarily in the Netherlands, Italy, and France due to its high distillate yields. Availability of Egina currently stands marginally above 200 thousand b/d, after becoming available in late 2018 and getting exported since February 2019. India has also been importing some barrels of Egina, with other major importers such as China and the US already having taken some cargoes.

Due to their strong distillate refinery margins, grades like Forcados and Egina have been supporting demand for distillate-rich grades from West Africa. Volumes have been clearing quickly for August and early September. Loadings currently stand above 200 thousand b/d, having been supported by the stable production. Nigerian production of crude oil and condensate has been between 1.9 and 2.1 million b/d so far this year, up around 11% year-on-year, with most additions referring to Egina. This has been the biggest oil and gas investment in the country, worth 16 billion USD. Total operates the project, with a 24% stake, with the participation of CNOOC, Vitol, Africa Oil, and Delonex Energy.

A very similar case to report for Angola, with only a few cargoes remaining available for loadings in September. The strong demand, especially from Chinese independent refineries, pushed most offers up so far, at least by 50 cents compared to the previous month. Some European refineries have been looking to secure more volumes, as they expect imports from Russia (mainly Baltic Sea) to further decline, while diesel refining margins add more support for this trend to develop. Meanwhile, the price of the Nemba grade has reached new record highs, with a premium of around 1.50 USD to dated Brent, primarily due to stronger European gas oil demand.

As data by IHS Markit's Commodities at Sea show, the continent has been importing more than 800 thousand b/d of crude oil from Nigeria since February 2019, with volumes from Angola and other West Africa countries has increased during the last couple of months. Flows from North Africa, primarily Libya, remain quite strong as well. 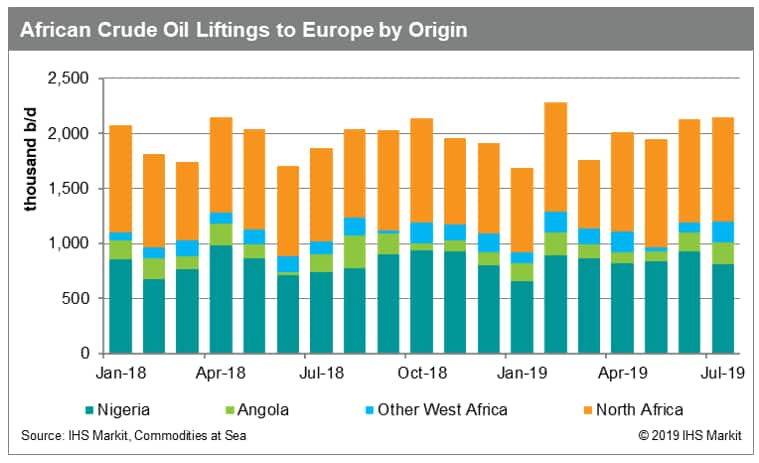