Sudanese crude oil lifting volumes have averaged 134,000 b/d so far in 2019, with China absorbing more than 60% of these barrels. According to data by IHS Markit Commodities at Sea, crude oil trade flows from Sudan have strengthened significantly since the same period last year, with total liftings up by 14.2% year-on-year and flows to China up by 28.8%. However, a further increase should not be taken for granted, as CNPC, Indian ONGC, and Malaysian Petronas are understood to be considering exiting Sudan's oil industry, primarily driven by unpaid dues to the companies. 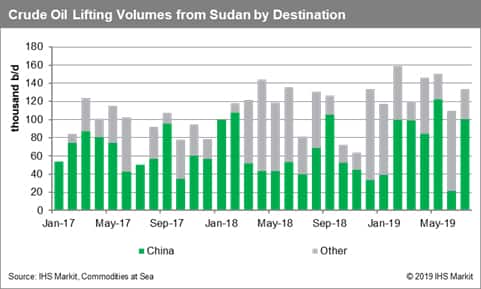 The country has been facing difficulties in paying back the three companies for oil extracted from fields controlled by joint-ventures with the trio. With obligations to ONGC approaching USD 500 million already, India has already been seeking arbitrage for almost a year. Chinese interests control around 40% of the project, Malaysians around 30%, while the stake of Indians stands at around 25%. ONGC officials have recently confirmed that the company "has reviewed the geopolitical situation in Sudan". The company has considered the option for exit from operations in Block 2A and 4 with the intention already conveyed to the government of Sudan in May 2019.

Since South Sudan's secession from Sudan, the country has been facing economic difficulties, having been highly dependent on oil revenues. The south controls around 350,000 b/d of oil production, 75% of the region's oil reserves. However, the north controls the only currently available transport route, providing access to the international oil market. Uncertainty has been increasing since earlier this year, with the army having taken control of the country after a military coup in April.

Elsewhere, Kenya's President Uhuru Kenyatta announced the first volumes of crude oil to be exported by his country, after completing a deal to export 200,000 barrels. This is considered a milestone, after discoveries in 2012 in the South Lokichar Basin. In June, the government signed an agreement with French Total, Tullow Oil and Africa Oil to develop an oil processing facility. Its capacity is planned to be between 60,000 and 80,000 b/d, which will allow the East African country to start producing oil and export within a few years. Tullow Oil expects the first lifting to take place by the end of September 2019.