Security continues being the biggest obstacle for Libya, one of Africa's most significant oil producers. Lack of stability and the ongoing conflict between rival governments do not allow any optimism to be developed, with most international oil majors reducing their exposure, as concern rises around the civil war and its impact on the country's oil industry.

With almost no progress and investment in new exploration projects, there can't be any hope that Libya will exploit its oil reserves, estimated to be the largest on the continent, any time soon. This could add another massive threat to the North African nation, as current oil production and exports cannot be maintained without any new projects becoming operational over the next couple of years.

The sentiment has been deteriorating during the last couple of months, with one after the other oil major abandoning Libya's new projects. Both BP and Eni have already deferred plans to start exploration in the country. The deal, originally signed in late 2018, to resume exploration in Libya, with Eni buying a 42.5% stake in BP's Exploration and Production Sharing Agreement (EPSA), will not materialize any time soon, at least not by those two international majors.

The situation between rival governments has been threatening the unity of the National Oil Company (NOC), with no clarity no over budget allocations. NOC's officials seem to be concerned that the country's oil production could fall sharply over the next nine months if already approved budgets remain withheld. 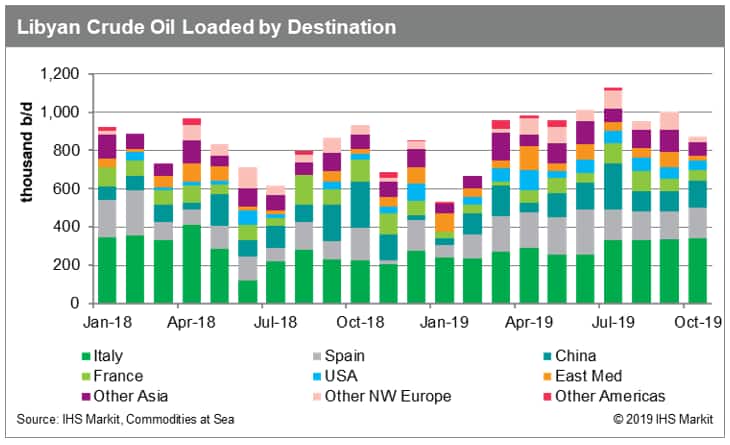 Focusing on recent data on the country's shipments by IHS Markit Commodities at Sea, loadings of crude oil seem to have moved lower so far in October, with volumes not surpassing 900,000 b/d during the first three weeks of this month. In September one million b/d of Libyan oil was loaded daily on ships, which has been very close to the average volumes observed since March. This means October might be the first month of a significant drop in Libyan loadings to report. Between November 2018 and February 2019, the country only managed to ship around 685,000 b/d; only time will show whether recovery is still on track.

Shipments to Italy continue dominating the market, with volumes having remained above 330,000 b/d since July 2019. Spain is the second biggest importer of the country's oil, with shipments standing at 160,000 b/d so far in October, exactly as much as it has been so far on average in 2019. China's appetite for Libyan grades has been rather volatile earlier this year, but with a noticeable increase to report during the last couple of weeks.

The market share of Aframaxes seems to have increased significantly during October, as rates of Suezmaxes have moved much higher rather quickly earlier this month, in parallel to the rally experienced in the market due to the US sanctions on Cosco tankers. 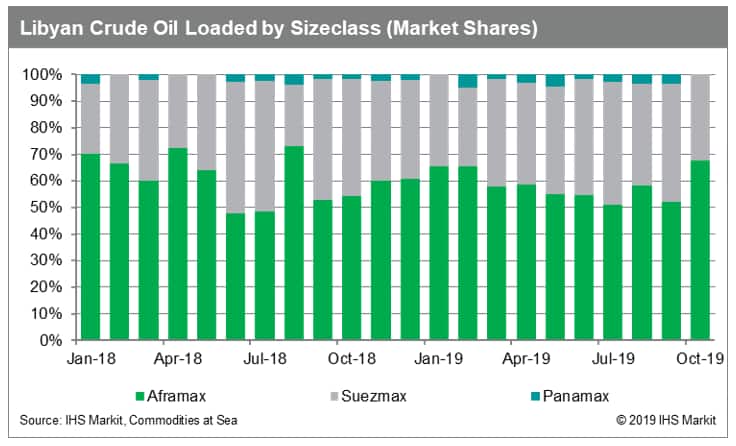