The dominant role played by tanker subsidiaries of COSCO Shipping Corporation in Chinese oil imports will have a ripple effect as buyers scramble to contract enough VLCC tonnage in a bid to secure the country’s crude oil supply. According to data from IHS Markit Commodities at Sea, COSCO tankers, a fleet consisting of more than 20 VLCCs, has been carrying around 630,000 b/d of crude oil to China, with a market share of around 7.6% for Chinese imports of crude oil. COSCO has also been increasingly active in picking up crude oil volumes from West Africa and the US Gulf & Caribs. On average, the market is estimated to replace units of around nine shipments per months, a difficult capacity to replace just ahead of the winter season peak demand. 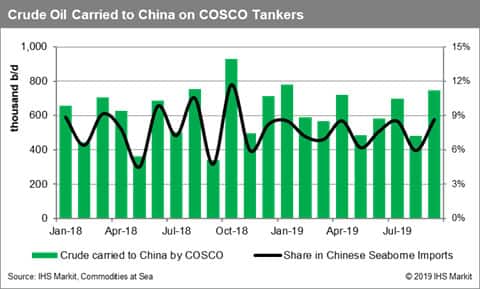 The company’s tankers have been carrying crude oil, mostly to China, which represents around 60% of the cargo carried since early 2018, according to data from IHS Markit Commodities at Sea. Not only China, we expect a ripple effect across other importers with excess of 10% of the cargo carried by the COSCO tanker fleet has ended up in South Korea and Japan, with the rest imported by other nearby counties across Southeast Asia. 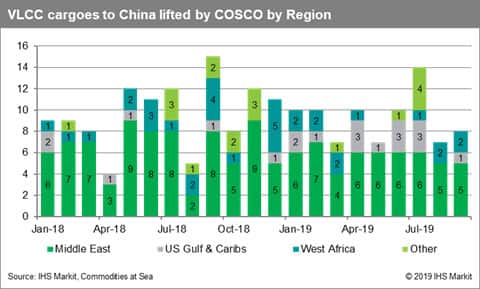 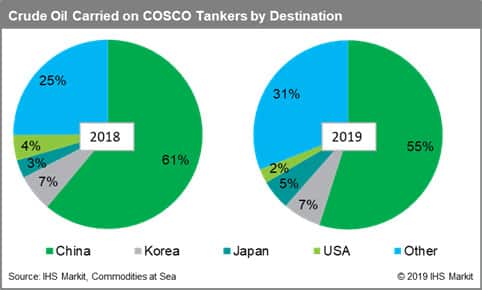 Meanwhile, some of the open vessels are now simply being ignored and avoided due to fears of sanctions imposed by the US. China’s Unipec has been replacing ship charters, following the US sanctions on COSCO tankers. The company quickly booked other units for four crude oil shipments from the Middle East Gulf. Ships of other Chinese tanker operators such as AMCL (owned by China Merchants) have been fixed instead. Unipec is now believed to be looking to book further cargoes from the Middle East Gulf employing more tankers of AMCL.

The VLCC fleet that will be affected due to fears that any link to COSCO might cause trouble in the future are estimated to reach up to 50 tankers. Such a huge removal from the active fleet overnight would turn the market rather tight, as more ships linked to COSCO get cancelled and then replaced by alternate units at much higher rates.

Within a day, freight rates in TD3C, the major route for VLCCs, were pushed from USD 34,500 per day to USD 46,500 per day on Thursday, as oil companies and traders reject any tonnage connected with Chinese state-owned COSCO Shipping. Demand in other exporting regions, including the US Gulf and West Africa, have been immediately affected as well, with charterers looking to quickly replace earlier fixed Chinese tonnage.

The US Treasury Department decided to impose sanctions on five Chinese nationals and six entities, as announced on Wednesday, for having violated sanctions on Iran. The list includes COSCO Shipping Tanker Dalian and COSCO Shipping Tanker Seaman and Ship Management Co Ltd, subsidiaries of COSCO Shipping Corporation. As a result, several tanker charterers are now rejecting any Chinese tonnage. This has already started to cause panic across the spot market, as the list of open vessels has dropped quickly. Charterers have tried to quickly secure replacements for cargoes earlier scheduled to be lifted by COSCO tankers.