Crude Oil Trade: Coronavirus shaping sentiment for now, but potentially a huge impact on the horizon

The oil market is going through the biggest negative demand shock since the Great Recession of 2008-2009, with the spread of the coronavirus in China having shut down significant transportation and business activity. The country's oil demand is estimated to have dropped 1.4 million b/d since last year over the same period. China, the biggest driver of world's demand growth, might face the risk of large oil inventory builds over the coming months, unless OPEC+ take decisive decisions to cut their production.

According to data by IHS Markit Commodities at Sea, seaborne trade of crude oil doesn't seem to have felt the impact of the coronavirus, with oil on water heading to China still looking strong, close to 290 million barrels. Most of this cargo originates from the Middle East, which had a market share of 35% throughout January 2020. African exporters (primarily West African) and suppliers across Central and South America followed, with market shares of 24% and 18% respectively during last month. Concern around China's reaction is clear in the market, but the impact is not yet there. The market expects China's GPD growth to feel the pressure, which as a result will not allow the country's demand for oil to grow as fast as earlier anticipated. Officials of OPEC+ have expressed their intention to act to prevent a surplus of oil if China's appetite doesn't prove strong enough. OPEC+ experts are meeting in Vienna to assess the demand situation. 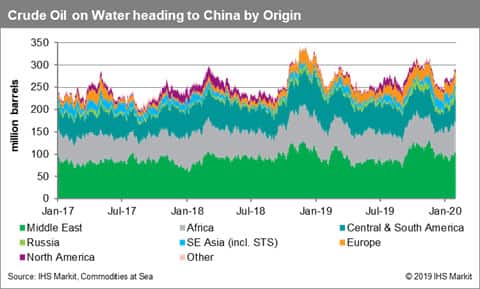 With Wuhan, one of China's biggest inland transportation hubs, having turned into a ghost town with more than 40 million people in lock-down, local refineries are understood to be cutting throughput by 10% to 20%. Nobody can be sure how they'd react this month, but estimates suggest losses of volumes between 1.4 - 2.8 million barrels a day in crude oil processing and crude demand for February. All eyes are now on OPEC+'s anticipated decision to act, with additional cuts of at least one million b/d required for the oil price to be supported. 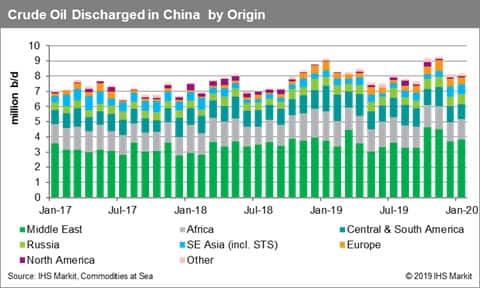 Focusing on the shipping market, activity remains close to normal levels, with China's seaborne imports above eight million b/d in January, but still lower than the volumes last seen in November. Assuming the coronavirus outbreak does not accelerate outside of China, there should not be huge panic. Meanwhile, Libya's exports have dropped sharply during the last two weeks. Since end of last week, the US also decided to lift sanctions on Cosco Shipping Tanker (Dalian) Co, driving oversupply worries to the shipping market. VLCC's now earn less than USD 16,000 per day in TD3C, carrying crude from the Middle East Gulf to China. 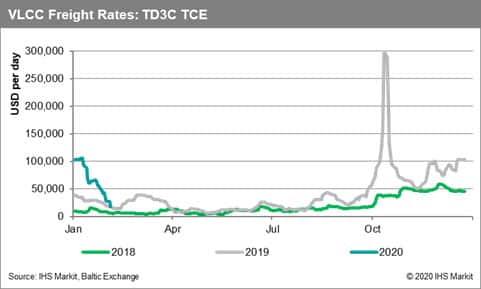