The Andean producer has been trying to recover after a tough 2018 driven by weaker oil production, volatility oil prices, security issues and lack of investment. The highest level of production since mid-2016 had been reached back in November 2018 when Colombia's output surpassed 880 thousand b/d. This was still roughly 15% below levels last produced before the oil price collapse in August 2014. The country's crude oil liftings have grown by around 12% in H1 2019, year-on-year. However, they have declined by about 10% compared to H2 2018. The South American exporter's international shipments of crude oil reached 480 thousand b/d on average during H1 2019, with the country still trying to recover. 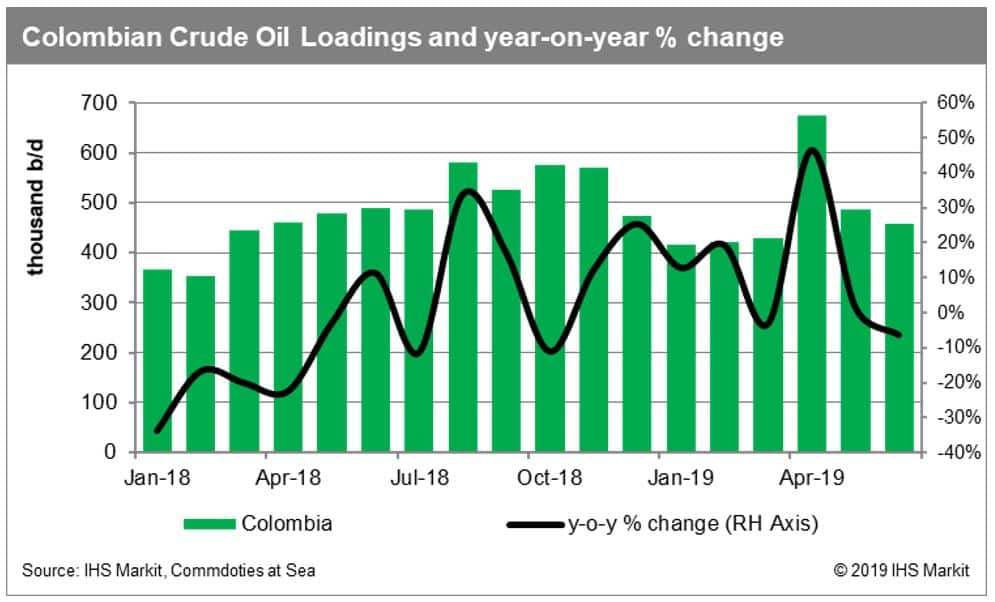 Drilling operations for oil and gas seem to have picked up in Colombia, with a growth of 5% in June as confidence rebounds again amongst operators. According to data made available by the local industry chamber, Campertrol, 141 rigs were active last month, which was higher than the 134 rigs in May, as well as the 126 rigs in June of 2018. This is considered a good sign, suggesting that the country's recovery will last. In early Q2, Colombia's President, Iván Duque, set the target for production to reach 900 thousand b/d by the end of this year. The idea is that higher output could support the local economy by delivering an additional three trillion pesos (around 950 million USD).

This year will be the first since 2014 with licensing rounds. Hocol, part of the state-owned oil company Ecopetrol, signed four contracts earlier in July for oil exploration. According to the company, the projects will require investments of around 100 million USD. Together with Chile-based GeoPark, the company plans to develop the Llanos 86, Llanos 87 and Llanos 104 oilfields, investing between 80 - 100 million USD by 2022 to drill six wells. An additional 16 million USD will be required for the COR 9 block in south-eastern Colombia that it will operate on its own.

Colombia's crude reserves went up 10% last year to 1.96 billion barrels, around 6.2 years of output, with the government wishing to increase reserves to at least 10 years equivalent. In late 2018, oil reserves stood at 1.8 billion barrels which were about 36% lower than a decade earlier.

China seems to be interested in Colombia's grades with flows to the country having averaged almost 120 thousand b/d so far this year, up around 33% year-on-year. USA continues to be the biggest importer of Colombian crude oil, with 220 thousand b/d shipped during the first six months of 2019, according to IHS Markit's Commodities at Sea. 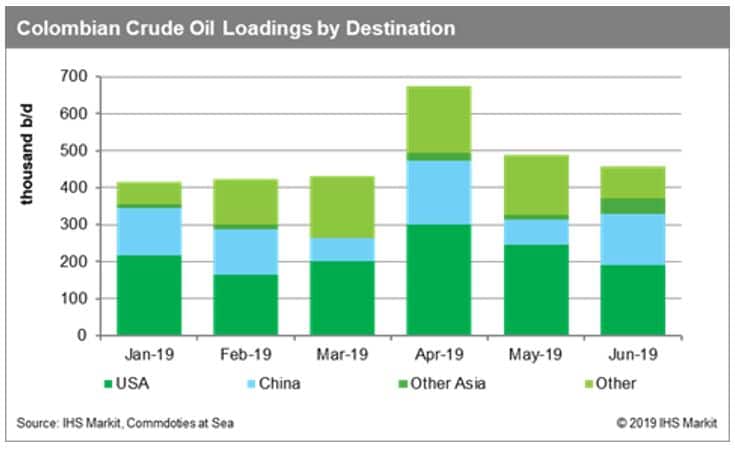