Crude Oil Trade: Brazilian grades remain popular across China, with output of Buzios to double by the end of 2019

Apart from Lula, Chinese buyers seem to be increasingly interested in another Brazilian grade, Buzios. Petrobras expects this new medium sweet crude grade to repeat the success of Lula in China, with most volumes absorbed by independent refiners across Shandong. Buzios has become rather popular, primarily due to its high cetane and rich middle distillate diesel yield. Delivery is usually set two or even three months ahead, with spot differentials to Brent recently strengthening. It currently stands close to USD two per barrel.

It's not only the northern market of China importing these grades, as Buzios was first discharged in the south of the country during the last quarter of 2018, but Shandong is now considered the major driver of this market. The increasing demand pushed Petrobras to lease crude storage facilities of 2.5 million bl at Dongjiakou port, to be more flexible in meeting future requirements. But in parallel to China, other importers have dynamically expressed their interest for these volumes, including India and the United States.

Petrobras has been facing some severe delays in completing projects and meeting targets around Buzios, mainly due to the high gas yields from its wells, but three out of the five planned FPSOs are already operational. None of these has reached full capacity of 150,000 b/d, but total output is already believed to have marginally exceeded 200,000 b/d, with the company targeting 450,000 b/d by the end of the year.

The United States sanctions on Venezuelan and Iranian barrels has been affecting the direction of flows from Brazil, as China, the major buyer of Brazilian crude in the past, had to face the increasing competition from the United States and other countries avoiding Venezuela's heavier crude such as Merey. China continues to import from Venezuela, with demand heavily supported by the significant discount offered. Meanwhile, most refiners across the United States Gulf have partially replaced Venezuelan barrels with Brazilian volumes, including heavy sour Peregrino, which could not fully fill the gap, as production only stands at 100,000 b/d.

As data by IHS Markit's Commodities at Sea shows, Brazilian crude loaded for China reached a high during November, but volumes have sharply declined since, as India and the United States started absorbing more. Both Lula and Buzios produce diesels with a high cetane number, while aromatics are kept low, making it rather popular across the Chinese market. The total volumes lifted have also been affected by the domestic demand which has been increasing. So far in May, at least six VLCCs have loaded in Brazil and are now heading to China. This number is expected to be much higher in June, primarily vessels fixed with Petrobras to load in Tubarao during the first two weeks of June and discharging across China in the second half of July. 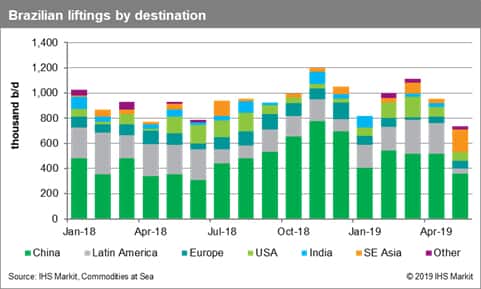