There is a lot of optimism to report from Brazil with oil companies getting ready to boost exports as the pre-salt production increases. International shipments of crude oil are estimated to triple over the next decade. The next big challenge for the country is strategically positioning itself in a market that keeps on changing globally. Restructure seems to have been completed with Petrobras now holding no refineries abroad, which makes client relationships rather important for its future performance. The company has been focusing on improving its logistics by taking steps to significantly reduce delivery times. They have also recently opened a crude oil tank in China's Qingdao Port, with a capacity of two million barrels.

Furthermore, Petrobras has been very active in planning improvements domestically as well. They plan to add new logistics bases. A contract was signed in late Q1 with Açu Petróleo for transshipment operations at Açu Port, north of Rio de Janeiro. Norwegian Equinor finalised a deal with Açu Petróleo for ship-to-ship movements at the Açu terminal. 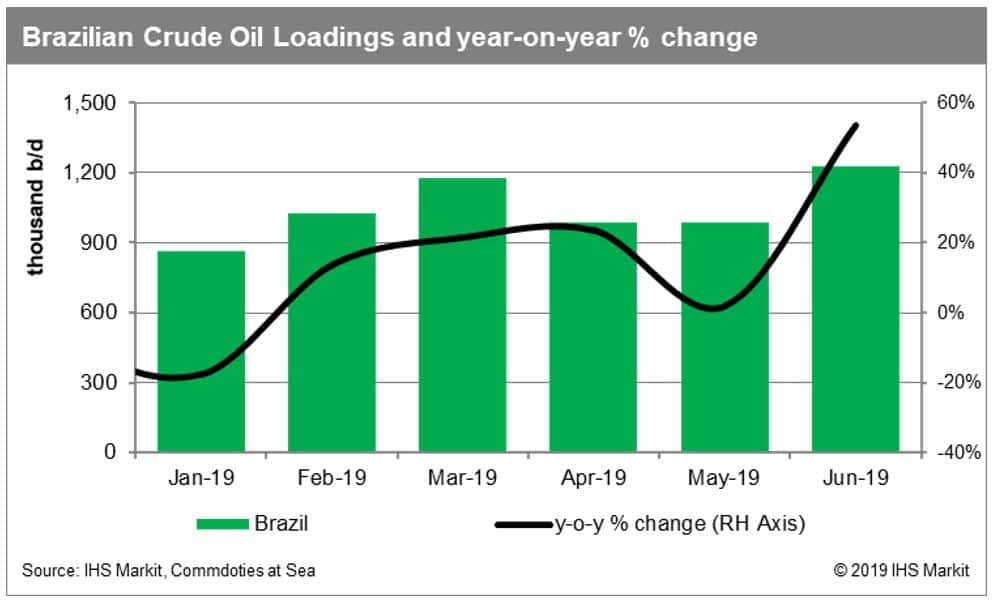 Recent data by IHS Markit's Commodities as Sea suggests shipments to have increased around 25% so far this year. China has absorbed most of Brazil's barrels and flows to the US boosted after the sanctions on Venezuelan crude oil. Trade to other destinations across Asia has also increased fast, especially during June. The growth expected for the second half of this year and in 2020 will further strengthen the role of the Latin American country among the world's leading exporters. Brazilian crude oil industry seems to have taken advantage of Venezuela's collapse, with the country considered the second major driver of global supply growth this year, after the US. Many large international companies are looking to increase their exposure to the country's production, with several projects being already negotiated. 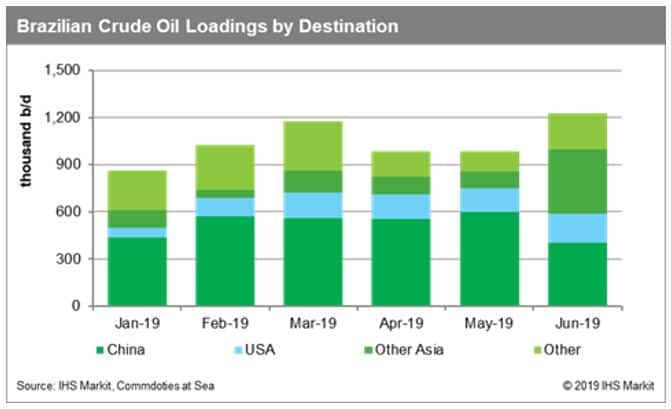 Brazil has become very important for the VLCC market. We have seen an abundance of ship loadings there compared to last year and several ballasters positioning near the Brazilian coast targeting future loadings of the region. The market share of the country in the VLCC demand has been growing fast along with the US Gulf. Ships loaded in the region typically cover much longer distances to destinations across Asia, primarily China.