China's crude oil imports from Iran increased dynamically in April, before the end of the sanction waivers pushed volumes to decline sharply last month. But even if we ignore May, volumes imported between January and April 2019 still stand around 27% lower year-on-year. Based on this year's data, Iran is the ninth biggest supplier of China, much lower than a year ago, when the country was ranked seventh. We still don't expect China to completely eliminate crude oil flows from Iran, but volumes are set to remain quite low for long.

Meanwhile, Beijing has expressed strong opposition to Washington's decision to end the sanction waivers. As the trade war between the two countries deteriorates, it will not be a surprise if China simply ignores the wishes of the US, especially if the price differentials become even more appealing to Chinese oil companies. However, this behaviour will not be the typical one to observe across China, as several companies have already realised how inconvenient it would be to continue purchasing from Iran. 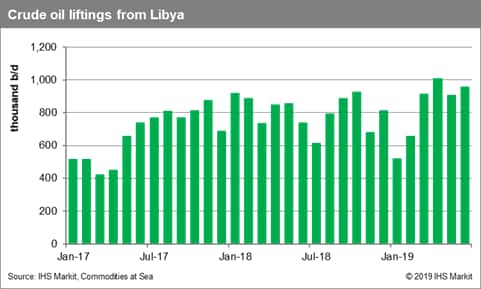 Focusing on the other side of the trade, China stands to be the last hope for Iranians under current circumstances, as the country's economy has fallen into a deep recession as oil production collapsed. Iran's production could find support only if China continues buying from them, even in smaller volumes. It has become clearer that India and the rest of the world have already halted any trade flows from Iran, as most of the discharging activity only took place in the first half of May.

Without a doubt, it will only be Beijing that could define the future of Iranian crude oil exports at this point. As one of the major drivers for global energy demand, having imported more than 9 million b/d of oil, China must face the aggressiveness of the Trump administration. The trade war between the two countries threatens to disrupt the current balances of crude oil trade. Any reaction by China could reshape markets yet again. Beijing has realised though that any conflict involving Iran would cause severe damages for China itself. The country has been heavily relying on oil imports, with around 41% coming from the Middle East Gulf. The region's market share stood much higher last year above 45%. Any disruption in the Strait of Hormuz would result in massive costs for China. Costs that could not be easily covered during such a period, when the country's economic growth is set to slow down.

With more than 300 million registered vehicles running on diesel and petrol, oil is essential for China's middle class. Washington can be more flexible as the domestic production is set to further increase, with the country turning into a net exporter by 2020. Energy security cannot be an issue that will ignore. Alternatives are still available, even if supply is considered to be rather tight. Based on its imports, the country seems to have been focusing on boosting stocks, getting ready ahead of a future crisis. Building relationships even with smaller producers, such as South Sudan, has proved to be rather useful for Beijing which seems to be ready to provide "cheap" loans to secure more energy for long. But these long-term agreements could prove dangerous for the rest of the global market, assuming China ties up the majority of its needs under bilateral deals. The rest of the market could then suffer from extreme volatility.