Further gains for China as the country increases its influence in Africa. Beijing has strengthened its influence in East Africa, after securing access to more natural resources, by funding the construction of infrastructure in South Sudan. The African country will provide a sixth of its oil output to China to fund infrastructure development, primarily road projects.

Last week, South Sudan's information minister Michael Makuei Lueth announced a deal between his country and China, according to which the Eastern African country will provide 30,000 barrels of oil per day to state-owned Export-Import Bank of China. The latter will fund South Sudan's largest infrastructure project. In comparison South Sudan provided only 10,000 barrels of oil per day to China in February. With an oil production of around 170,000 barrels per day, the country who only became independent from Sudan in 2011 after a long lasting Civil War. This never really stopped as the country still suffers domestic conflicts between troops and militias backing President Salva Kiir and former Vice President Riek Machar, even after a peace deal was signed in 2018.

Without doubt, the holy grail for both sides is the county's oil industry. The country's cabinet agreed to triple the volumes offered to China which will in return improve the region's infrastructure. The account created will fund projects, part of China's Belt and Road Initiative, including a 244-mile (392-km) road from Juba to Rumbek in the central region, with work to begin in mid-April, while other projects will be developed on the Kenyan border.

Even after South Sudan's independence from Sudan in July 2011, the country is highly dependent on Sudan's export pipelines and port since it's landlocked. Disagreements over oil revenue sharing has been damaging oil production and investment in both countries. Proved oil reserves stand at 1.5 billion barrels for Sudan and 3.5 billion barrels for South Sudan, with most of these reserves located in the oil-rich Muglad and Melut basins. 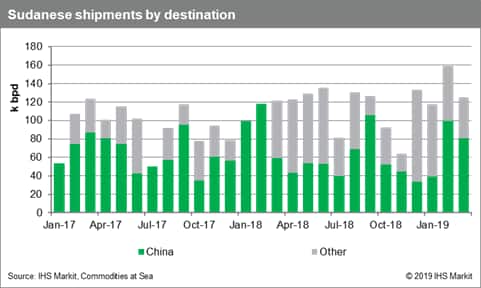