Crude Oil Trade: Angola exports more to China, but overall volumes are down

With most September cargoes from Angola already booked, prices have now eased with sellers simply looking to clear, before the market focuses on later loadings. Chinese independent refiners have been active, having provided a significant demand, but with a clear decline observed during the last week. The premium for Girassol to dated Brent has now dropped below USD 3.00, while the Dalia premium has already reached USD 2.50. Distillate refining margins remain high across Europe and Asia, making Angolan crude popular once again after a long break that lasted around three months, during which Chinese demand was quite disappointing.

Meanwhile, Total together with partners decided to launch the Zinia 2 deep offshore development 150 kilometers off the shores of Angola. This project will have a production capacity of 40,000 b/d, being the first of several possible developments on Block 17. This could extend the profitability of the block, which has already produced more than 2.6 billion barrels. Total controls 40% of the block, together with Equinor (23.33%), Exxon Mobil (20%) and BP (16.67%). 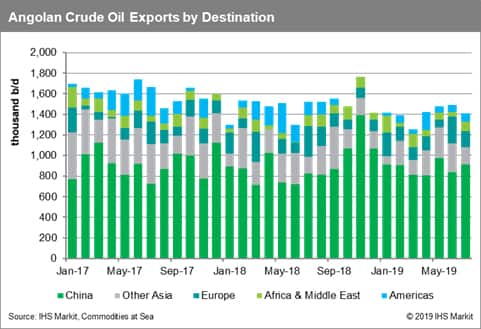 Focusing on the destination of Angolan exports, China has been dominating with volumes accounting for more than 60% so far this year. Flows to the Far Eastern country have been increasing by more than 8% between January and July 2019, year-on-year. July exports to China went up by 9.3%, even if total numbers went down, with most independent refiners interested in Cabinda, Mondo and Saturno. Mostarda, the most recently introduced grade by Angola, arrived for the first time in China last month. However, it seems that overall Angola has suffered huge losses in terms of market share in Chinese imports, in favour of Middle Eastern suppliers, mainly Saudi Arabia. As data by IHS Markit Commodities at Sea shows below, Angolan barrels lifted for China have remained quite flat since early 2019, in contrast to Saudi Arabian volumes that have increased dramatically during the last couple of months. This primarily refers to Angola not supplying a lot to new refining projects recently launched in China, an area where Saudi Arabia has been much more successful. 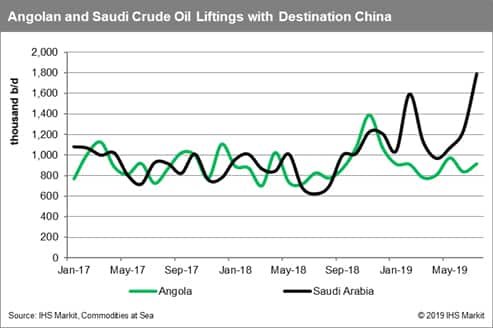