Angola has been facing some severe challenges in its effort to maintain crude oil production since the oil price collapse in 2014. The threat of a near-term decline is possible, President Joao Lourenco's response comes following the first new licensing round since 2011 together with some additional reforms that could potentially revert the downward trend. But as many of the country's oil producing fields are now considered mature, this won't prove to be an easy task. After taking over in 2017, the new government has been responsible for a plethora of oil policy changes, including the establishment of conditions making the country much more appealing to international oil companies, while opening up more offshore and onshore basins. The new licensing round includes ten oil blocks in the Namibe and Benguela basins and will close next month.

The plan for 2020 is clear. Oil output will rise to 1.44 million b/d, with 35,000 b/d to be added over the next couple of months. There is no doubt that more will be needed to drastically change the current sentiment in the country. Even the start-up of the 230,000 b/d Kaombo deep-water project more than a year ago wasn't enough for the trend to be reverted. The drop over the last two years is estimated to have surpassed 300,000 b/d, primarily due to technical and operational problems. Shipments according to IHS Markit Commodities at Sea will stand close to 1.292 million b/d this month, lower than September's levels of 1.34 million b/d. 1.514 million b/d of Angolan crude oil was loaded on ships in October 2017. VLCC volumes have remained above one million b/d since August, but Suezmax cargoes have dropped to the lowest level so far in 2019, just 230,000 b/d. 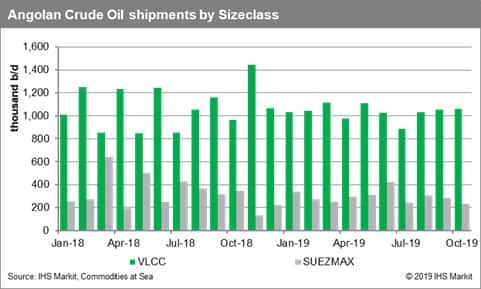 China continues to absorb most of the country's exports, with the market share of other Asian importers (primarily India) having declined significantly over the last couple of months. Trade flows to European destinations (mainly Iberia and Netherlands) have remained strong, as the local markets seem quite interested in some of the country's crude oil grades. 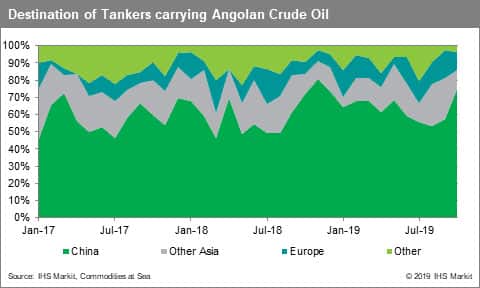