There has been a lot of discussion around what to expect after the departure of long-ruling Abdelaziz Bouteflika. Algeria's transition to a democratic state hasn't proved to be that easy, with a lot of concern about the impact this could have on the country's prospects for economic development. The army is now yet again the major power holder, resulting in further protests with no prospects for a peaceful transition on the horizon. As the political crisis escalates, no action has been taken so far to improve the country's revenues, which rely on oil. Algeria has failed to diversify away from oil and gas, which still represent 95% of total exports and around a third of GDP. A price above USD 110 per barrel would be needed to keep the local economy balanced. But meanwhile, Algeria's Sonatrach recently decided to cut Saharan blend crude selling price for August, setting it at dated Brent minus 60 cents a barrel, against a price of dated Brent plus one cent a barrel for July. With oil prices to remain below USD 70 per barrel, the situation doesn't seem promising for the country.

Focusing on trade flows from Algeria, Europe continues to absorb most of the barrels exported by the North African country, as data shown by IHS Markit Commodities at Sea. Meanwhile, there has been a noticeable increase in volumes since July to Japan, Korea and India. 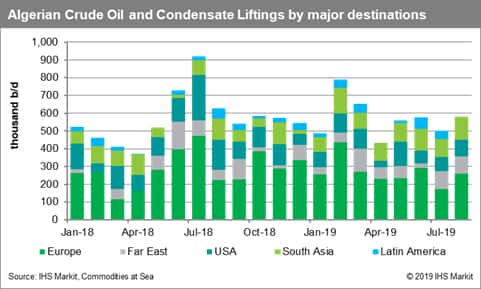