Algerian crude oil loadings seem to have returned to normal levels, close to 600,000 b/d, in October. Activity has recovered, after falling in September to 550,000 b/d. Cargoes shipped to European importers have surpassed 400,000 b/d last month for the first time since February 2019, with most laden ships heading to France, Netherlands and the UK. Flows to Asia remained low, with a clear downward trend to observe since July still in place. October's loadings with destination Asia has been the lowest in a year, with only October 2018 having been lower. In terms of market share by size segment, Suezmaxes now represent 50% of volumes loaded last month. This has been the highest since April 2019. Aframaxes lifted around 45% of Algerian shipments in October, having recovered since September, when they also lifted 33% of total seaborne exports.

Algeria's cabinet decided to approve changes to the country's hydrocarbon law, with protests immediately triggered. Meanwhile, Sonatrach has been holding talks with ExxonMobil and Chevron on exploration in the country. The changes will make investment in Algeria much more appealing to foreign investors. Sonatrach will still be required to control at least 51% of any venture. 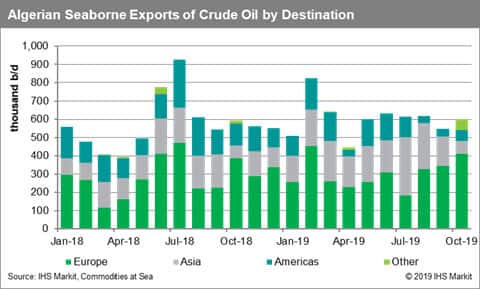 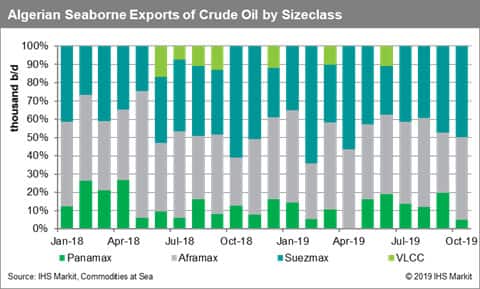