Crude oil carried on Aframaxes has been declining in August, according to data by IHS Markit Commodities at Sea. The reduction has forced several owners to reposition their ballasters, which in-turn changes the balances observed in the market. The impact has been clear in the freight market, with spot rates feeling the pressure of oversupply developed in exporting regions across Europe, while less open units left in the Middle Eastern Gulf. 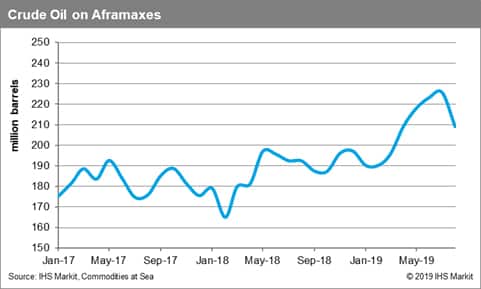 The beginning of August was a struggle for the Aframax segment, with rates having failed to recover, as earlier anticipated. The situation has been similar across all major routes, with a decline of at least a few points observed everywhere.

TD14 and TD17 reached record low levels this year, close to WS 90 and WS 55 respectively, while TD19 fell below WS 75. The drop has been dramatic, as rates stood above WS 100 a month ago. In terms of TCE, earnings fell from over USD 15,000 per day to just USD 3,000 per day. Both the North and Baltic Sea markets seem to be under severe pressure. Sentiment remains unchanged in the Mediterranean, with a plethora of options for charterers to choose from. 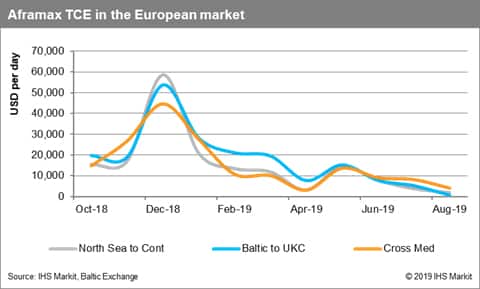 The downward trend might impact the Middle East, but rates in TD8 still exceed USD 10,000 per day. The on-going tensions in the Middle Eastern Gulf have supported earnings, with several owners repositioning ballasters away from the region to avoid the risk.

Earlier this month, demand was also affected by Libya's National Oil Company declaring a force majeure on El Sharara oilfield which is set to push August's exports lower than previously expected. Meanwhile, West Africa's early September loading programme doesn't look very promising, but hope comes from the US, as exports continue to rise. Volumes carried on Aframaxes to international destinations have increased by almost a third since a year ago, with South Korea having been the major contributor absorbing additional barrels. However, earnings haven't been strong since last month. 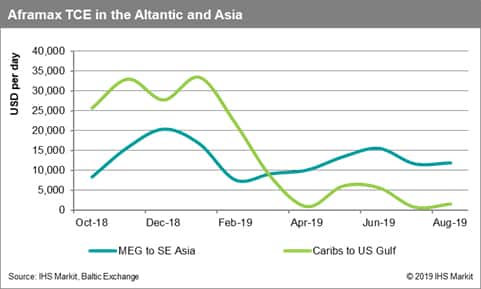 Overall, Aframax earnings have been improving year-on-year, standing more than 40% higher than a year ago (for the period between January and July). Fundamentals will improve, however, as deliveries have slowed down, with no new ships added to the fleet since late June. Demolitions have been rather limited this year as well, but as scheduled deliveries for H2 2019 stand at low levels, supply is at least expected to remain at current levels, allowing some space for optimism to develop for the last quarter of this year.