Crossing the river by touching the stones: New framework to promote fuel-cell electric vehicles in China

On 16 September 2020, China's Ministry of Finance, along with four other government agencies, issued the Notice of Launching Demonstration Applications of Fuel-Cell Vehicles. The new policy replaces the previous direct subsidy mechanism scheme on fuel-cell electric vehicle (FCEV) sales and will reward eligible city clusters for the development of the FCEV wider value chain. The central government has supported the development of FCEVs since 2009 by subsidizing consumers, but economics still hinder this market development. As of June 2020, China had fewer than 7,000 FCEVs in operation. In comparison, the development of battery electric vehicles (BEVs) has far exceeded that of FCEVs despite declining subsidies. Since the subsidy scheme on vehicle sales has not produced significant results, the government shifted the approach to incentivizing breakthroughs in key core technologies and industrialization of basic materials to improve economics across the FCEV entire value chain. This is a Chinese "crossing the river by touching the stones" approach typical for developing a new field—proceeding cautiously and making adjustments along the way. 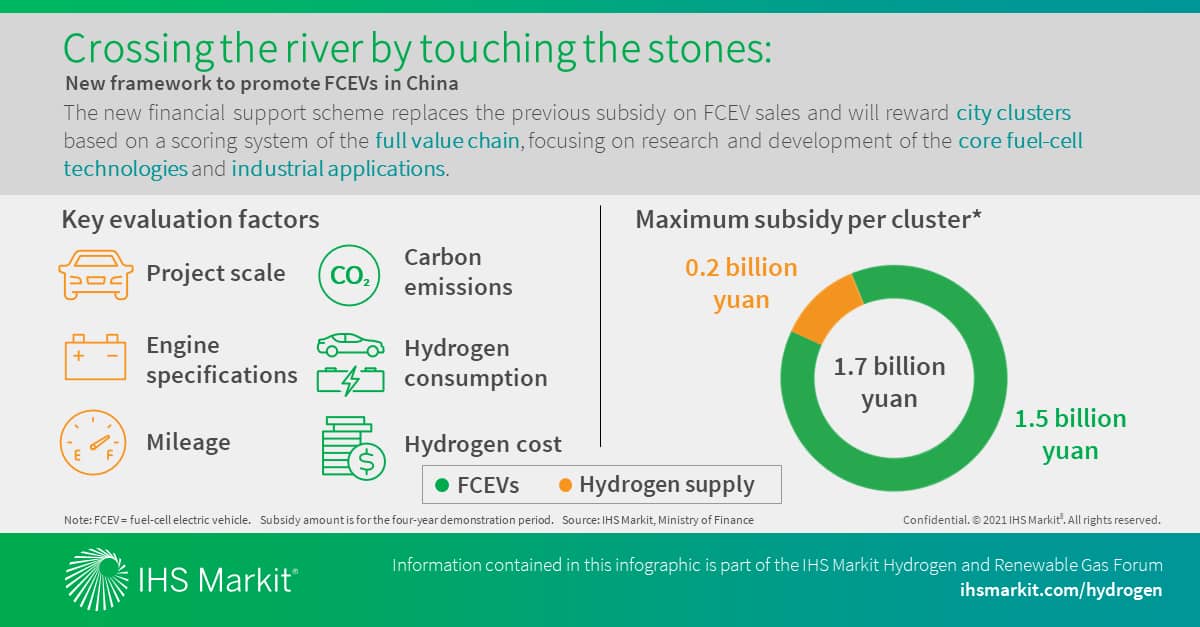 The Notice stated that the demonstration clusters should include outstanding enterprises across the industry value chain regardless of the physical locations. The demonstration clusters should identify the lead city with a clear division of tasks and coordination plans. By 15 November 2020, lead cities should submit applications and implementation plans to the five agencies that issued the Notice. As of 15 November 2020, 15 clusters have submitted applications, but no results or timetable of assessment results has been announced. The first batch of demonstration projects will likely be based in Shanghai, Jing-Jin-Ji, Guangdong, Shandong, Sichuan, Chongqing, and Hubei, given that they have relatively complete industrial chains and comparably abundant research and development resources.

Demonstration clusters will be evaluated for a subsidy grant for four years on a variety of factors based on a point system. Specifically, each point is worth 100,000 yuan of subsidy. The upper limits per cluster are set at 15,000 points for FCEVs and 2,000 points for hydrogen supply, equivalent to a maximum four-year subsidy of 1.5 billion yuan and 200 million yuan, respectively. The point standards will decline year by year. When the demonstration period is up, extra subsidies up to 10% the original amount will be granted to clusters that surpass the targets. The government will adjust subsidies midway through implementation depending on each cluster's implementation progress. If the government approves the seven city clusters that are considered comparably advanced in FCEV development, the total government funding could be as much as 11.9 billion yuan ($1.7 billion) over the next four years.

The FCEV industry will play a vital role in China's energy transition and technological ambitions. Low-carbon hydrogen and applications including in the transport sector can help China achieve the net carbon neutrality goal by 2060. In addition, the FCEV industry is at an early stage of development, both in China and globally. Developing this new market segment can help China solidify its position as a global technology powerhouse.

Learn more about our coverage of hydrogen and renewable gas through our Hydrogen and Renewable Gas Forum.