Croatia is close to fulfilling all the requirements to join the Schengen zone. These include joining the European border agency Frontex, meeting the required common standards for external border crossings, and integrating itself with several centralized systems and databases, including the European Border Surveillance System (EUROSUR) Schengen Information System (SIS) and the Visa Information System (VIS), intended to alleviate migratory pressures and counter-security threats.

Schengen entry would benefit Croatia's economy by removing existing border controls that are equivalent to a small tariff on trade in goods and services with the rest of the EU, generated by added travel and/or shipping time and extra paperwork. Most importantly, Schengen membership would remove border controls for the 11.6 million tourists (75% of total foreign visitors) annually to Croatia from Schengen-area countries. Croatia derives approximately one-fifth of its GDP from tourism. Removing travel barriers would enhance Croatia tourism and service-sector export earnings.

The shipping sector - accounting for approximately 4% of Croatia's GDP - also stands to benefit from Schengen entry. Rijeka is already a busy seaport, particularly for energy transport, with an oil pipeline connection to Budapest. The removal of border controls on cargo transport from Croatia to the EU interior would boost port activity, as it is the closest seaport to Hungary and Slovakia, with motorway connections already established.

General merchandise and service trade between Croatia and the rest of the EU would also benefit from the removal of border restrictions with Slovenia and Hungary - again, a similar benefit to removing a moderate tariff. More than 60% of Croatian merchandise exports and approximately 75% of its imports are conducted with Schengen members. 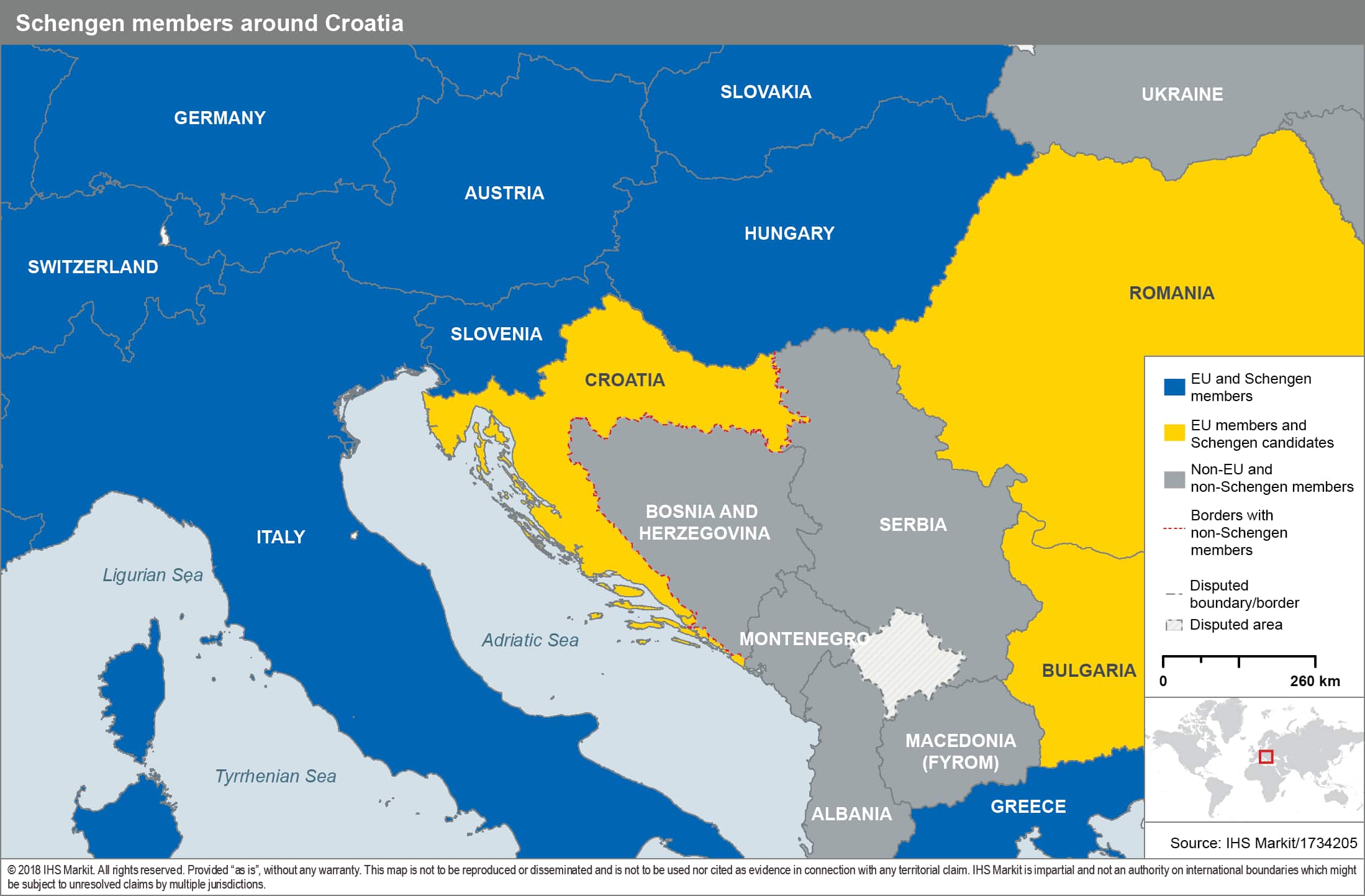 Schengen accession would oblige Croatia to harden its southeastern borders with Montenegro, Bosnia, and Serbia, including more rigorous blanket custom controls. This is likely to exacerbate delays at the relevant borders, and damage relations with adversely affected countries.

The main issue likely to arise at the Croatia-Bosnia border involves migration. The number of migrants arriving in Bosnia, in the hope of clandestinely crossing the border into Croatia, and therefore into the EU, has increased substantially during the past year. Stricter surveillance along the border would translate into a growing number of frustrated and increasingly desperate migrants gathering along Bosnia's northern border crossings, potentially aggravating outbreaks of violence. Such events, together with longer border checks, would indicate an increased risk of disruption to ground cargo and supply chains.

Another problematic area would involve travel to Pelješac, Croatia's southernmost peninsula. This can only be reached via the mainland by crossing through a narrow corridor of Bosnian territory that was designed to grant Bosnia sea access. Adverse effects on trade and tourism in Pelješac are likely to be short-lived. Croatia is expected to complete a bridge, thereby creating a single stretch of contiguous territory, in mid-2021. Bosnia has resisted this plan over fears that it would impede its only open-sea access.

The border with Serbia is likely to suffer similarly increased delays. This would pose a particular risk to agribusiness, given the high level of agricultural exports from Serbia to Croatia and their perishable nature. Although recent attempts to find a bilateral resolution to their border dispute indicate good will, progress in the relationship between the two countries is likely to remain hampered by periodic disputes caused by lingering distrust relating to the Yugoslav Wars.

To become a Schengen member, Croatia will require European Commission approval, and that of all Schengen member states. This latter stage presents the main potential stumbling block. Slovenia has repeatedly threatened to block Croatia's accession over their unresolved border dispute, following the earlier precedent of initially blocking Croatia's bid to join the EU. Should Croatia accept the international tribunal's decision on the matter, or initiate dialogue to find a compromise, this would indicate a reduced probability of a Slovenian veto. Hungary has also threatened to veto Croatia's accession after it allowed migrants to enter its territory in 2015. A substantial increase in the number of migrants using the West Balkan route during the next 12 months would increase the probability of Hungary, and other Schengen members, rejecting any further enlargement of the border-free area. If successful, Croatia plans to become a Schengen member by mid-2020.