The United States President on 8 June released the findings and recommendations of a 100-day review into the security of critical supply chains. A key vulnerability identified is the semiconductor "famine" that, since December 2020, has disrupted the recovery of several industrial sectors and spotlighted the complexity and strategic importance of the supply chains for these microchips.

Fears over the semiconductor shortage are not trivial: IHS Markit Purchasing Managers' Indices (PMI) show that by April 2021, delays to suppliers' deliveries of semiconductor inputs were longer than after the 2008-09 global financial crisis, and almost as long as in March-April 2020, when major economies were entering coronavirus disease 2019 (COVID-19)-related lockdowns. The sectors that registered sharp and unanticipated surges in demand during lockdown - automobiles and parts, household goods, and technology equipment - were worst affected.

Delays have lengthened as prices have increased, indicating that semiconductor input manufacturers are operating at or near full capacity. Historically, output has grown in response to longer delays. We see this in the correlation of monthly PMI data from 2009 to 2021 for the three worst-affected sectors. The correlation breaks once delivery times lengthen above the PMI survey's long-term average. Further short-term price rises are very likely. If there was spare capacity, delivery times to these sectors would not have risen. Assuming delivery times had continued at their October 2020 level, then, allows us to estimate the output 'lost' by these sectors because of the increase in delivery times from January to April 2021:

Pinch points along the supply chain have emerged because global electronics exports are concentrated in Asia Pacific. However, the experience of major suppliers has varied. Exports of semiconductor-related goods so far in 2021 have been at their lowest level since 2007, with the contraction concentrated in mainland China and Taiwan. The key constraint on deliveries is the throughput of shipping containers: at mainland Chinese ports, container throughput cyclically declines in February, but Shanghai port recorded the lowest decrease in throughput for February 2021 in over a decade. This points to mainland Chinese production levels being greater than usual during the Lunar New Year holiday while shipping containers remained in short supply at Chinese ports.

If the semiconductor supply chain is concentrated in Asia, which sectors in which countries are exposed to disruption, and by how much? Input-output trade flow tables allow us to track input purchases of computer electronics, which include semiconductors.

Any policy of relocating semiconductor fabrication away from the region will be very expensive: new fabrication plants cost between USD5 billion and USD20 billion. Much of the planned capital expenditure is in Asia or by Asian companies that often depend on US-made equipment. Equipment manufacturers in turn depend on highly specialized parts suppliers - mostly based in Asia. Therefore, any attempts at diversification are likely to benefit Asian countries/territories, which will remain one of the fastest-growing regions for sales and capital expenditure given the large semiconductor and electronics manufacturing clusters already based there.

Some countries stand to benefit. India will seek to challenge Vietnam and other Asian neighbors with generous incentives to build fabrication capacity in the country.

Each node along the supply chain is embedded in a political, business, and security environment. Over the past five years, business regulations in the countries/territories through which the semiconductor supply chain runs have become more burdensome and civil unrest more persistent. The chart below shows trade flows for about 6,000 product categories from our Global Trade Atlas. The data are weighted first by the geographic concentration of exports of electrical components used in semiconductor manufacturing, and second by our national-level Country Risk scores. 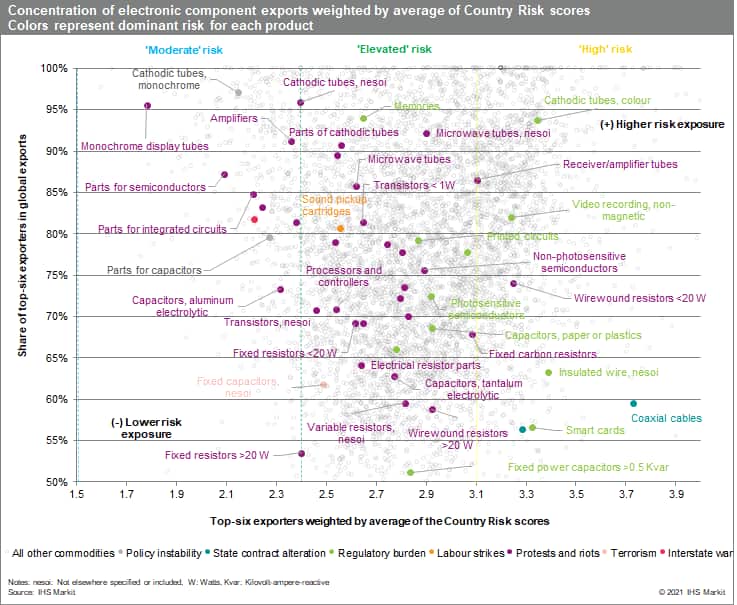 IHS Markit projects that in 2022, moderating demand for electronic components will bring supply and demand closer to balance. Specific categories will show some resilience in pricing given the changing demand landscape. Given the complexity, inter-dependence, and high capital outlays associated with semiconductor supply chains, the risk of a mismatch between supply and demand will remain high, with downstream sectors competing for allocation at semiconductor foundries.

This report that this blog post is based on had inputs from several teams across Economics & Country Risk (Global Economics, Economic Indices, Comparative Industry Service, Pricing and Purchasing, Country Risk, and Integrated Research), Automotive, and Maritime & Trade.