COVID-19 related underperformance of cities hits the Americas, but not for long

Major cities across the Americas suffered in particular during the coronavirus disease 2019 (COVID-19) pandemic earlier in the year, but those in the US saw a sharp rebound as lockdown measures were relaxed at the end of the summer.

In this analysis we again turn to PMI™ Output Index data, across private sector manufacturers and service providers (where both are covered) in a range of cities. To select these, we looked at the largest population centres and city economies in countries across the North and South American continents, for which we produce PMI data, and were guided by the sample sizes we have available on our panels to ensure reliable results.

The inclusion of multiple cities is due to a relatively even spread of companies in each of the big cities used across our panels, and has the added effect of ensuring we capture as much of the trend between large cities and the rest of the country as possible.

It is also important to note that our surveys in Canada, Colombia and Mexico cover private sector manufacturers and do not include service providers. As such, the output index represents just the goods producing sector in each country.

Data highlights that the cities in each of our five countries underperformed in terms of output during the middle of 2020 as the COVID-19 pandemic hit, with their respective City Performance Scores all in negative territory. This trend mirrors that seen in Europe, where our performance data pointed to the pandemic having a stronger impact on large cities. This reflects a number of factors, including people avoiding crowds due to the higher risk of infection, offices lying empty, and measures implemented to tackle the spread of the virus resulting in swathes of the economy - particularly customer facing sectors - closing temporarily.

Each of the five monitored city groups registered an underperformance in May, June and July, with only cities in Brazil and Colombia outperforming in the immediate aftermath of the pandemic in April. Moreover, the metropolises in both Brazil and Canada are still lagging behind other parts of those countries, while the extent of Mexico City's underperformance remains severe.

US metropolises take biggest hit, along with Mexican capital

The starkest underperformances of cities relative to the rest of the respective countries through 2020 to date were registered in the US and Mexico.

Our amalgamation of top-10 US cities recorded city performance scores of -2.2 in May and -2.1 in June.

Correspondingly negative readings were seen in Mexico City during the third quarter, while the November reading of -1.8 still signalled a considerable underperformance of Mexico's largest city compared to the rest of the country.

Elsewhere, Colombia's big-3 cities recorded a slightly less severe, but still notable underperformance in June with a score of -1.7, while Brazilian and Canadian metropolises each saw city performance scores of -1.2 in July. 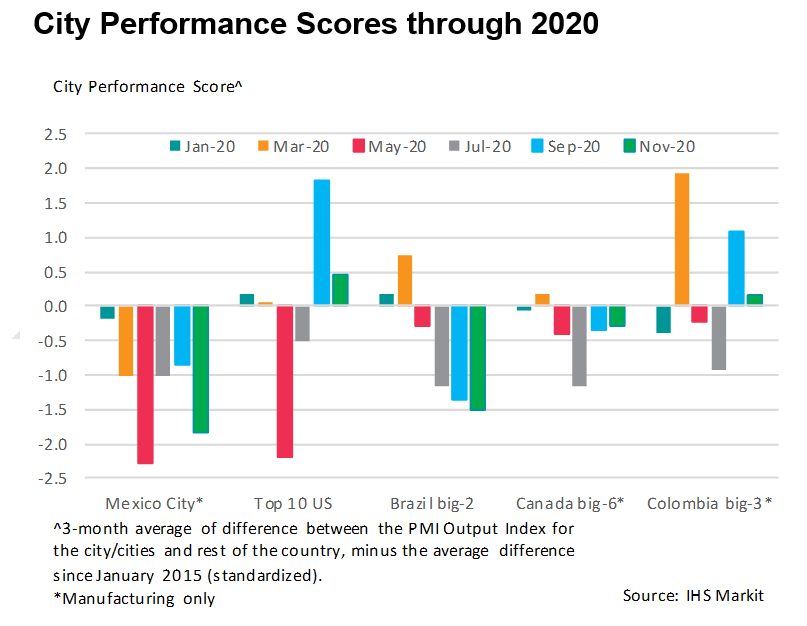 Strong recovery in Brazil not led by big two cities

Despite being a frontrunner in global expansion and leading the worldwide manufacturing recovery according to PMI data, Brazil's two major cities continued to underperform compared to the rest of the country in the third and into the fourth quarter of the year. Moreover, the extent of the underperformance worsened in August with the city performance score dropping to a year-to-date low of -1.8. The figure has since ticked up only to -1.5 in November. While growth has been recorded in Rio De Janeiro and Sao Paulo, the score indicates that rates of expansion have lagged behind less built-up areas so far. 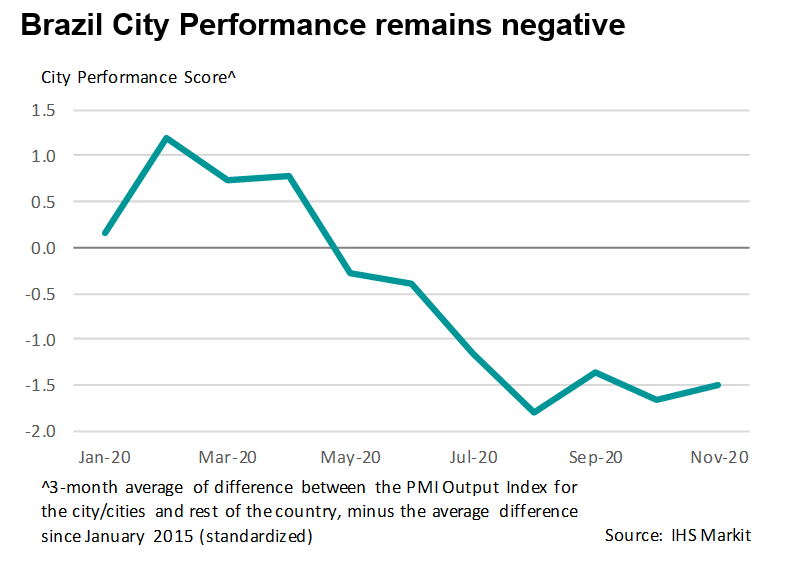 Business as usual into fourth quarter for Colombian and US cities

City performance scores for both Colombia and the US have since hit positive territory, to signal a relative overperformance. The combined top-10 US cities posted a score of +1.8 in both September and October, pointing to a noticeable level of outperformance as big cities roared back to growth following the initial easing of lockdown restrictions. That said, November's figure was the lowest for four months, at +0.4.

The improving trend was mirrored in Colombia, where the big-3 cities have registered an outperformance relative to the rest of the manufacturing sector in each month since August. Moreover, across our five countries, only the metropolises in Colombia have an average score throughout 2020 that is in positive territory (+0.2), signalling that city performances have been broadly similar to the country-wide trends. 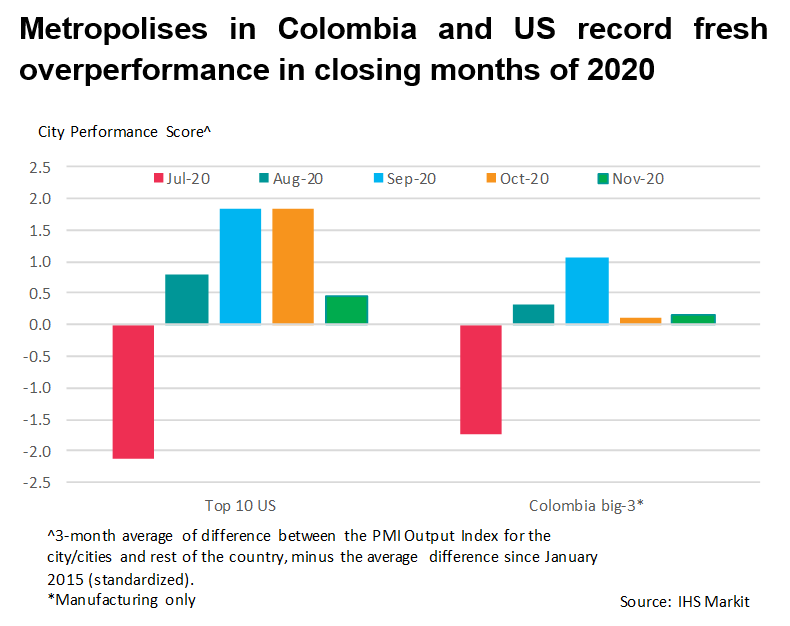 Positive news of a vaccine has buoyed expectations in many parts of the word, and although slowing, the global economic recovery continued into November. But, most cities in both the Americas and Europe continue to struggle as we enter the final month of the year. This provides further evidence in support of our initial hypothesis regarding adverse effects from the pandemic hitting urban areas harder than the country as a whole, and highlights an ongoing shift, although likely temporary, away from cities as economic powerhouses.

Nonetheless, PMI data will continue to provide a vital signal of both the wider economic recovery and that in major cities across the world. We plan to add further coverage and continue work on this topic as we move to 2021. 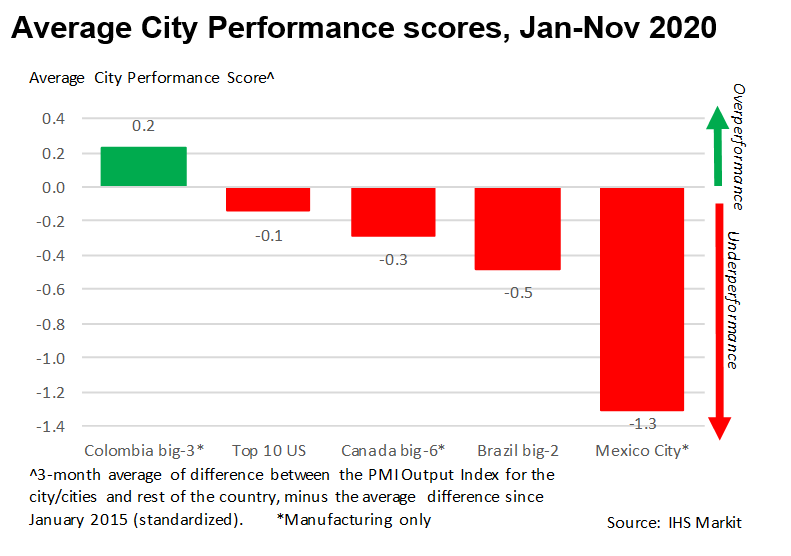