The Automotive Supply Chain and Technology team at IHS Markit conducted a survey among executives at automotive suppliers across all key regions to capture the perception of suppliers regarding the impact the COVID-19 pandemic has on their manufacturing operations and the supply chain.

The survey results clearly highlight that one third of suppliers reported moderate to severe impact from fast spreading global pandemic, but there are still high levels of uncertainty among parts manufacturers on business continuity and the business outlook. The weakening of vehicle demand due to OEM plant shutdowns and availability of raw material due to logistics issues were listed as two of the major concerns.

Nearly half of the respondents in the survey said that COVID-19 pandemic has had a "limited impact" on their operations, for example a minor reduction in output due to reduced OEM demand, with greater resilience in Asia (China and Japan mainly) where 46% of respondents claimed the disruption was contained. At the opposite side of the spectrum, Europe emerged as the region most impacted according to the survey with 64% of respondents claiming a severe impact is European-based. A severe impact is defined as a major event such as a plant shutdown. North America is so far positioned in between Asia and Europe in terms of impact according to survey respondents, which suggests the mood of the supply base follows to an extent the statistics on the outbreak as Asia seems to be recovering while Europe is currently still at the center of the outbreak. 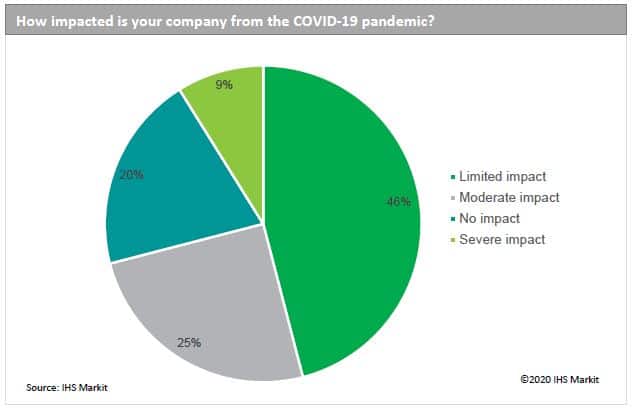