Business activity across the eurozone collapsed in March to an extent far exceeding that seen even at the height of the global financial crisis. Steep downturns were seen in France, Germany and across the rest of the euro area as governments took increasingly tough measures to contain the spread of the coronavirus.

At 31.4 in March, the 'flash' IHS Markit Eurozone Composite PMI sank from 51.6 in February to register the largest monthly fall in business activity since comparable data were first collected in July 1998. The prior low was seen in February 2009, when the index hit 36.2.

The March PMI is indicative of GDP slumping at a quarterly rate of around 2%, and clearly there's scope for the downturn to intensify further as even more draconian policies to deal with the virus are potentially implemented in coming months. There's also a suggestion that, based on experience of the global financial crisis, official data series such as GDP could also fall further than the PMI diffusion indices suggest. 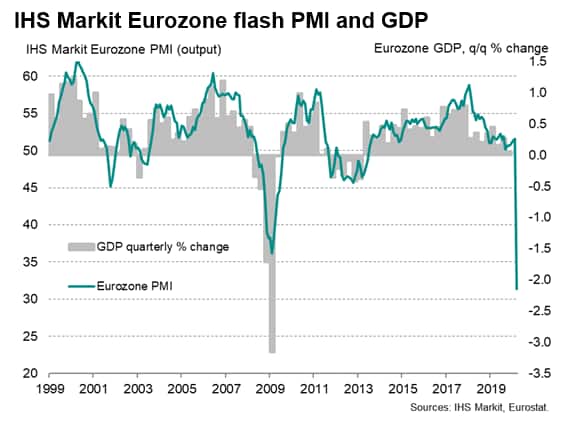 The March survey indicates that demand for many goods and services has fallen dramatically, while near-record supply chain delays have stymied production and business closures mean an increasingly large proportion of the economy is being mothballed.

The services sector was especially hard hit, notably within consumer-facing industries such as travel, tourism and restaurants. The survey's service sector business activity index slumped just over 24 points from 52.6 in February to reach 28.4, surpassing the survey's prior low of 39.2 (recorded in February 2009) by a wide margin. 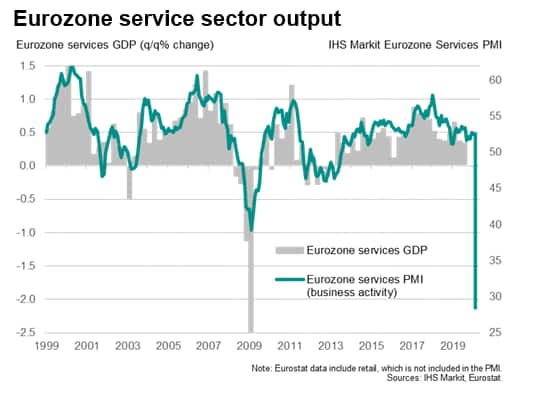 Manufacturing saw a less severe, though nevertheless still steep, downturn in production. The survey's gauge of factory output dropped just over nine points, down from 48.7 to 39.5, registering the largest monthly contraction of production since April 2009.

New lows were seen for other survey variables as the virus hit demand for both goods and services. Inflows of news business fell at the sharpest rate yet recorded, linked in part to a record fall in export business as cross border trade flows seized up. A record slide in demand for services was accompanied by the sharpest fall in goods orders since April 2009. 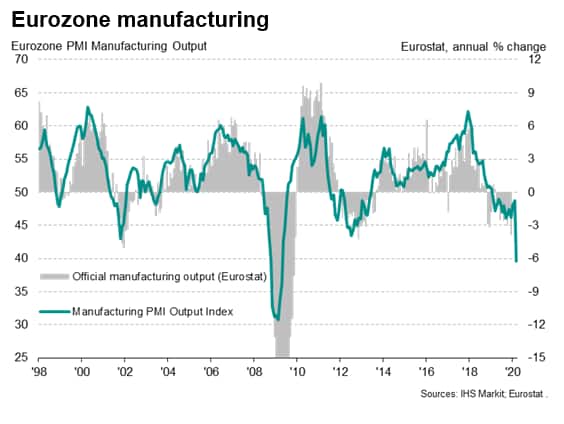 Worryingly, the March survey showed that employment is already falling at a rate not seen since July 2009 as despair about the outlook broadens. Business sentiment about the year ahead has plunged to the gloomiest on record, suggesting policymakers' efforts to date have failed to brighten the darkening picture. French business activity contracted at the sharpest rate in nearly 22 years of data collection, the composite flash PMI sliding from 52.0 in February to 30.2. A record decline in service sector activity was accompanied by the sharpest drop in factory production since March 2009.

The equivalent index for Germany meanwhile plunged from 50.7 in February to 37.2, signalling a weaker downturn than France but still down to its lowest since February 2009. Germany saw a record deterioration of service sector activity and the largest drop in manufacturing output since July 2012.

The rest of the euro area reported an even steeper decline than seen in both France and Germany, led by comfortably the sharpest fall in service sector activity ever recorded, though manufacturing output also shrank at the steepest rate for almost 11 years. 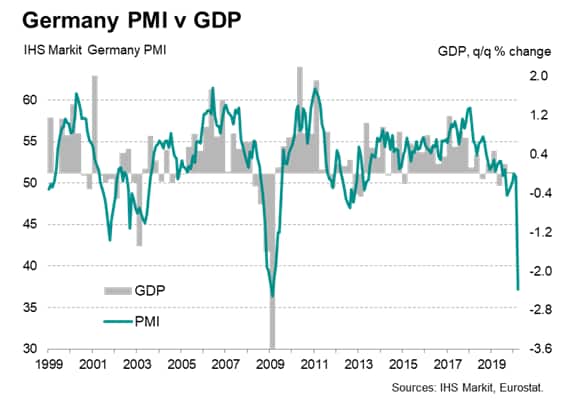 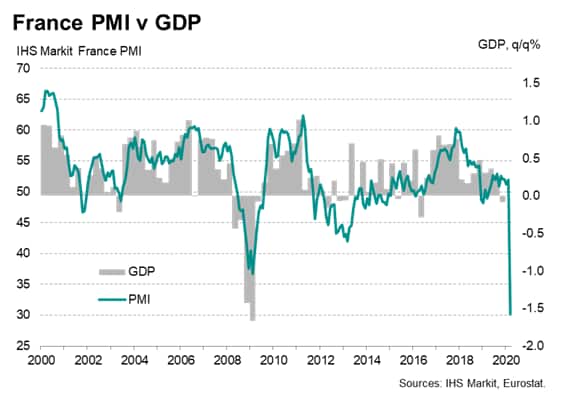 Given that PMI data are shown as diffusion indices, which measure month-on-month changes in each variable, base effects mean that they do not tend to stay low for very long (if output of a firm halts in one month and remains unchanged at zero in the following month, the second month would in fact show a flat picture, i.e. an index reading of 50). We can therefore expect the services PMI to stabilise once shutdowns last for more than one month, and to then rise when activity restarts. However, in manufacturing it may be the case that we have not yet seen the full impact of lockdowns on consumer spending, which could dampen orders and factory output further in the coming two-to-three months.

We might therefore expect the PMI output and new orders data to bottom out in the second quarter before improving in the third quarter. Employment declines could last longer, however, depending to a large extent on COVID-19 policy response measures.

Read more about the eurozone outlook in our special report here.