As the outbreak of the coronavirus disease 2019 (COVID-19) continues to escalate and widen, early signs from PMI data signalled marked - often unprecedented - contractions across national manufacturing and service sectors. Taking a deeper look into finer sector detail, we can see that the worst-hit areas, unsurprisingly, revolved around consumer services and tourism. Global lockdowns and travel bans, alongside growing uncertainty as to the longevity of the outbreak, led to the worst performance by the global consumer services sector since data collection began in October 2009.

Looking at the breakdown further (where data are available), the downturn was focused on the tourism sector, most notably in Europe. Key economies with large tourism sectors such as Italy and Spain have seen the greatest impact of the disease in the region, as medical professionals seek to turn the tide of the spread and lockdowns have grown more draconian. As such, PMI data have pointed to an unprecedented contraction across Europe. 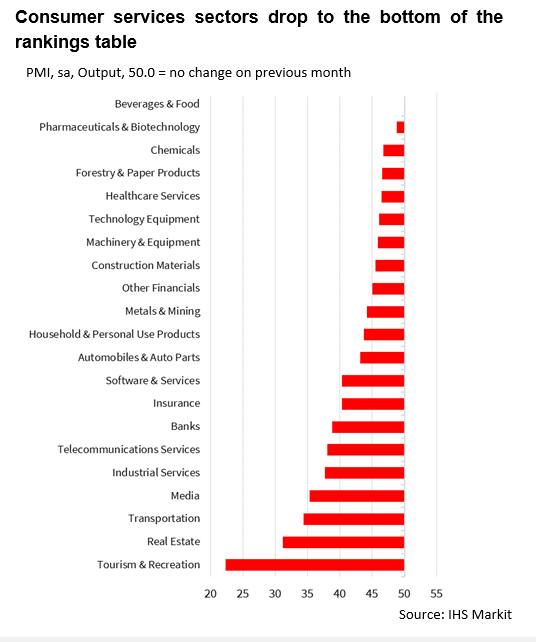 According to the latest PMI sector data, the drop in both domestic and foreign demand for services, largely stemming from widespread lockdowns which include the closure of many restaurants and bars, has resulted in an unprecedented decrease in new business. The impact was most keenly felt in countries where lockdowns have been in place for numerous weeks and the escalation of the outbreak has been stark.

Leading the worst-performing sectors were those centred around consumer services, which includes hotels, restaurants, media and recreational pursuits. Also featuring near the bottom of the ranking tables were real estate and transportation for all regions where data were available, as travel and housing markets have largely been forced to shutdown following emergency public health measures.

With tourism accounting for a large proportion of overall GDP in both Italy and Spain (around 13% and 15%, respectively), and the high season fast approaching, the mass cancellations being made at the moment will have a substantial impact on economic growth as we head into the second quarter of 2020. In Italy, regions of great importance to the sector have been the hardest hit, most notably in Lombardy and Veneto. Alongside the loss of Thomas Cook going into the 2020 season in Spain, travel bans will have exacerbated already challenging demand conditions. 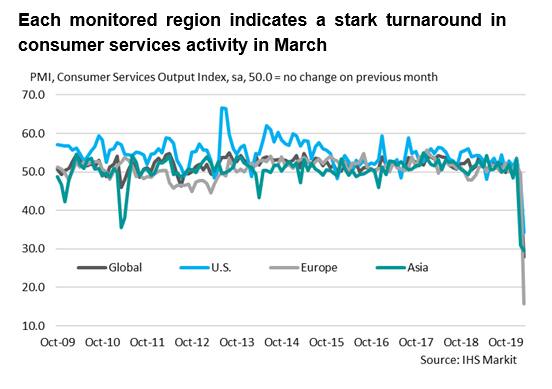 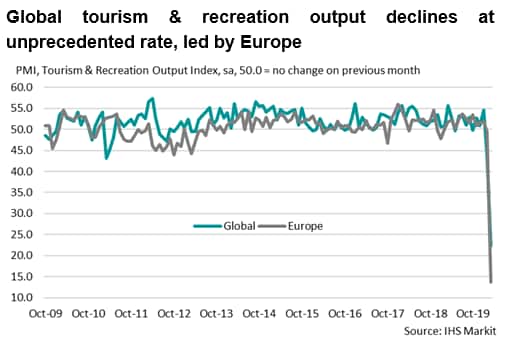 Not only is the sector's contribution to overall growth vital, but also the number of people it employs will have an important effect on overall employment. Following the global financial crisis, unemployment (especially youth unemployment) across southern Europe spiralled, something that could be a real possibility once again if emergency measures are kept in place throughout the high season and the global recovery is slow. March PMI sector data signalled the fastest decline in workforce numbers across the European tourism sector since data collection began.

Italy reported one of the fastest falls in overall employment since the survey began in 1998, while Spain recorded the strongest contraction in employment since the depths of the financial crisis in March 2009, as both countries struggled to contain the virus outbreak.

A slow recovery of employment, as evidenced following the financial crisis, may only serve to prolong the downside risks to economic growth moving forward. 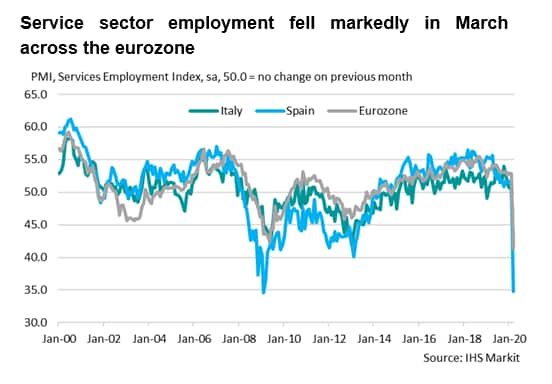 Although manufacturing sectors are expected to see a turnaround soon after the end of emergency measures, at least in respect to business levels stabilising, as has been seen following the relaxing of rulings in China, uncertainty among consumers could lead to a much more drawn out recovery in the service sector. The continued escalation in cases across Europe has led to forecasts being revised down further for 2020, with the eurozone expected to contract 4.5%. Italy is forecast to decline by 6.0% and Spain by 5.0% during 2020, highlighting the severity of such a sharp shock to economic activity. 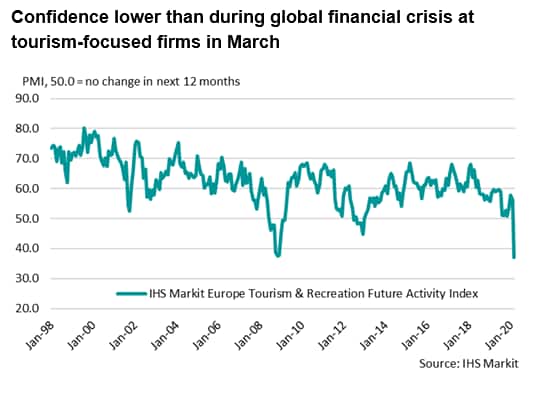