As a result of the fallout from COVID-19 and the extensive fiscal support measures, public debt to GDP in several European countries is set to match or surpass historical highs.

As long as interest expenditure remains sufficiently low, in line with the global trend over the last few decades, governments can live with debt stocks that are elevated by historical standards. However, elevated public debt does present some key risks, including:

Changes in public debt: a framework

Even in a low-interest-rate environment, governments will have incentives to lower their public debt in relation to GDP. The evolution of public debt-to-GDP ratios depends on these underlying drivers:

This can be expressed using a simple equation:

The key terms in the equation are defined as follows:

Put simply, nominal GDP growth running below the nominal interest rate on the outstanding debt would imply, other things being equal, a "snowball effect", whereby nominal debt increases more quickly than the size of the economy, and vice versa.

The basic formula to lower public debt to GDP ratios is for real growth and inflation to be higher than the combined primary budget balance, interest expenditure, and the deficit-debt adjustment. There are several ways to achieve this, including:

Table 1 shows recent episodes of public debt deleveraging across European economies. These include 10 instances between 1995 and 2007 in which the public debt-to-GDP ratio declined by more than 10 percentage points (pp.) in Western Europe. 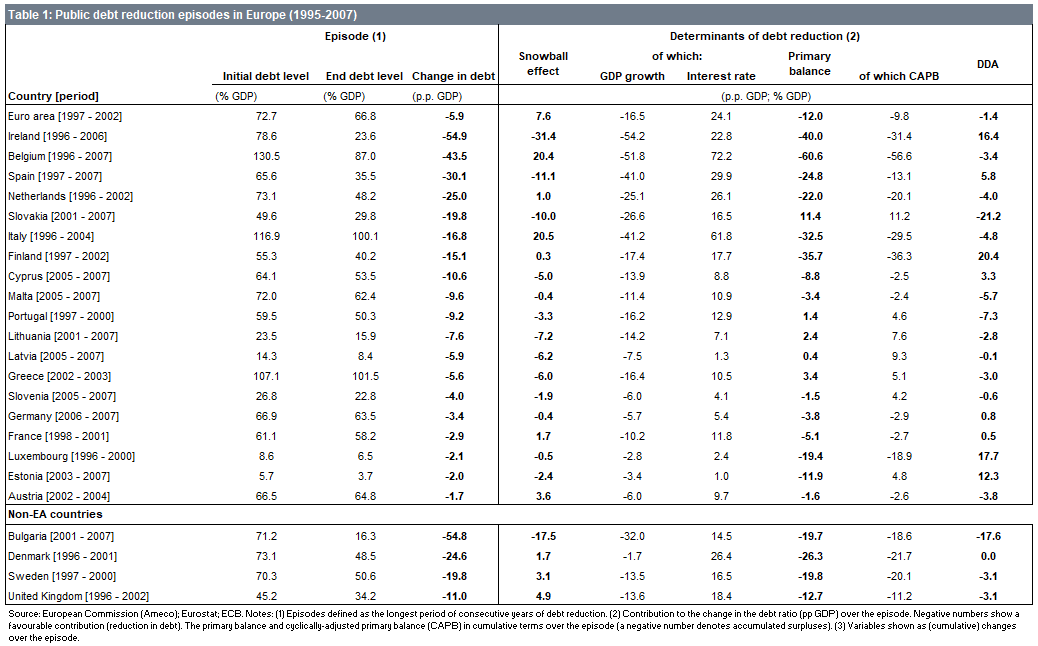 Of the 10 economies, only in Ireland, Spain, and Cyprus the snowball effect contributed to a reduction in their public debt-to-GDP ratios. However, in all three, the pre-global financial crisis period of high growth was accompanied by the build-up of significant macroeconomic imbalances, later resulting in a need for external financial assistance and painful macroeconomic adjustment programmes.

Two lessons can be drawn based on the experience of the public debt reductions in Western Europe in the decade or so prior to the global financial crisis:

Italy and Germany after 2010

Perhaps driven by this experience, the response to the eurozone's escalating public debt vulnerabilities after the onset of the global financial crisis was centred on fiscal austerity. However, the outcomes were very different across economies.

Whereas in Germany, nominal growth outpaced interest payments over the period in question, with the snowball effect subtracting 8.1pp. from the public debt-to-GDP ratio, in Italy it added 23.2pp., far outweighing the contribution of the primary budget component, which lowered debt by 14.5pp. After 2010, the adverse snowball effect dominated as Italy's economy never recovered its pre-financial-crisis peak with real growth and inflation remaining anaemic.

Given the unprecedented adverse shock from the COVID-19 virus pandemic, governments across Europe have rightly responded with large-scale fiscal support to try to mitigate the short- and longer-term negative effects on their economies. Although necessary, ballooning fiscal deficits have led to substantial increases in public-sector debt-to-GDP ratios, in many cases from already high levels.

As long as interest costs remain low, aided by central bank asset purchases, high debt-to-GDP ratios can be sustained for some time. However, they do entail various risks and once the post-COVID-19 recovery is well established, high debt burdens will need to be tackled.

Structural impediments to future economic growth across many European countries will make this very challenging, while prolonged fiscal consolidation risks suffocating growth still further and escalating social tensions. Therefore, alternative solutions including mutualisation and extensive ECB involvement are also likely to come under consideration further down the line, although both will face significant political hurdles.