At the turn of the year the soda ash market saw a decline in prices as high stocks in a number of markets had led to downward pressure. However, despite the usual fluctuations in growth from year to year, demand in the medium term was expected to steadily increase. In response, a number of capacity expansions had been announced, with much of that extra capacity due to come on stream in the US over the next 2 to 3 years, with further expansions due to come on stream in 2025.

Since then, the soda ash market, as with the market in many other commodities, has seen a major impact from the COVID-19 outbreak. Soda ash is used as a raw material in the production of a number of basic goods such as architectural and automotive glass, glass packaging, sodium silicates and soaps and detergents, as well as a number of other smaller applications. As such, the temporary closure of large sections of many economies, in a bid to tame the spread of COVID-19 across the world, has had a significant negative impact on demand for soda ash. In response, soda ash producers have been forced to rethink their future plans whilst also adapting to the current market situation.

The production of flat glass, which in turn is used to make windows in buildings and automobiles accounted for 29% of the world's total demand for soda ash in 2019. Historically container glass, or glass packaging, was the largest end use of soda ash. This changed in the mid-2000s, as the growth of the Chinese economy, coupled with the rapid emergence of new cities in China, drove the demand for architectural glass. The fact that the flat glass sector is so heavily linked to the construction and automobile sectors means that it has been particularly badly impacted by the COVID-19 outbreak. 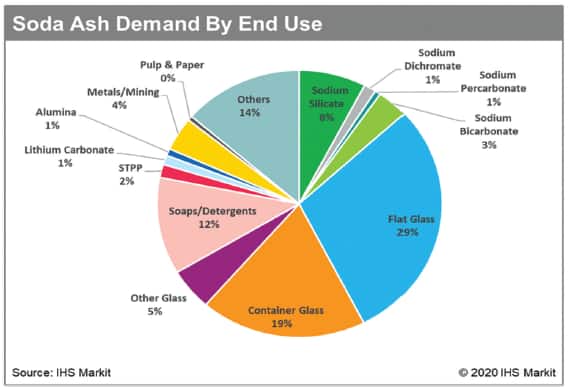 The temporary closure of car plants, has led to a number of flat glass plants across the world, being put on hold or recycle mode leading to a significant drop in demand for soda ash. The overall impact on soda ash demand from these closures is limited by the fact that only around 10% of flat glass globally goes into automobile production. It should also be noted however that the loss in demand for automobiles has had the further impact of reducing demand for tyres for which sodium silicates is a raw material, thus further reducing demand for soda ash. Demand growth for lithium carbonate, which over recent years has been driven by the growth in the electric vehicle industry has also been impacted by the slowdown in automobile production. Growth in demand for soda ash from the lithium sector over the 5 years to 2019 averaged 18% annually, with much of this growth focused in Argentina and Chile. Growth in demand for soda ash from the lithium carbonate sector is now expected to be flat in 2020 as a direct result of the COVID-19 Pandemic.

The construction sector, which accounts for most of the flat glass demand has so far seen less of an impact from the Pandemic than the car industry but has nevertheless slowed. The outlook for construction remains mixed, as the impending economic slowdown is likely to impact investment in this sector, whilst it remains to be seen how much of this damage can be avoided through government stimulus. Meanwhile, the third major sector into which flat glass production is channeled, and by far the smallest is the solar glass sector. So far there has been little impact on demand for flat glass in this sector as a result of lockdowns, but as with other end use sectors the short-term outlook for solar glass remains unclear.

Unlike flat glass, demand for container glass, saw an increase in the immediate aftermath of lockdown announcements, particularly in Europe and the US, as consumers stockpiled food and beverages packaged in glass. Demand for soda ash from this sector was also bolstered by a lack of available cullet, or recycled glass, which increased demand for virgin raw materials. In the final weeks of Q1 however, it became clear that demand was beginning to slide, as bars and restaurants were forced to close and tourism ground to a halt. This was followed by a number of temporary closures of plants as labour shortages became an issue. Although some demand was maintained by consumers switching from drinking outside the home to drinking inside the home, the overall demand for beverages, particularly alcoholic beverages which are traditionally packaged in glass, fell. In some parts of the world such as India and South Africa, this fall in demand was further compounded by the imposition of stringent bans on alcohol sales. In a recent update of their business outlook, the world's largest container glass producer Owens- Illinois stated that they expect to see an overall decline in global demand for container glass of between 5-10%.

One soda ash end use sector that has perhaps fared better as a result of the Pandemic is the soaps and detergents sector. As with container glass, in the initial stages of lockdowns across the world, consumers stockpiled soaps and detergents. This initial spike in demand, was followed by a period of higher demand as an increased focus on hygiene, saw demand for cleaning products rise. This boosted demand for soda ash, particularly in developing regions, where the use of powder detergents remains significantly higher than liquid detergents, as liquid detergents don't use soda ash as a raw material. There are however some market participants who think that it is unlikely the increased demand will be upheld throughout the rest of the year. In regions such as Europe and the US, some of the increase in soaps and detergents demand from consumers has been offset by a loss in demand from the hospitality sector. 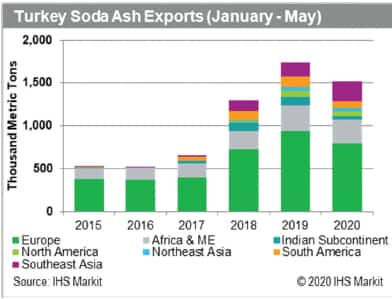 Despite some soda ash end use sectors faring better than others, overall demand for soda ash has seen a dramatic decline globally, particularly in the second quarter of the year. Although the situation has improved since the market's lowest points in April and May, demand for soda ash for the year is likely to be significantly lower in 2020 than it was in 2021. As a result, soda ash producers are having to adapt their current operations by lowering output. The US producer Genesis Alkali put its Trona based plant, located in Granger Wyoming, on hold initially until September before extending that period until the end of the year. Other producers in the US have slowed production as have producers in Turkey and Europe. The outcome of these moves can already be seen in export statistics; the US, Turkey and China are the world's largest exporters of soda ash, but volumes from all three sources have fallen dramatically over recent months. Exports in the month of May, from the US, Turkey and China were down 34%, 49% and 29%, respectively, compared to May 2019. 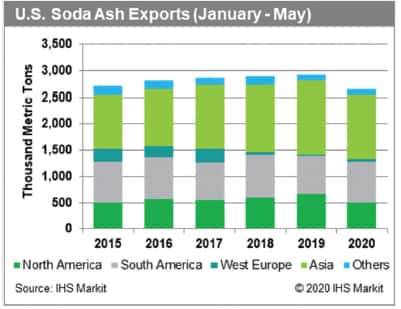 Meanwhile Chinese producers have, since lockdowns were lifted, maintained operating rates close to what would be expected in a normal year, despite the fact that demand in both China's domestic and export markets remains weak. As a result, huge volumes of stocks of soda ash have begun to build up, with inventories in China reaching a peak of 1.76 million mt in late May, before falling to 1.3 million mt in early July after a number of plants took maintenances in June. The high stocks have meant that domestic and export prices in China have fallen significantly in recent months, with spot export prices hitting a low of $130 per mt FOB compared to a range of $200 - 225 per mt FOB at the turn of the year. 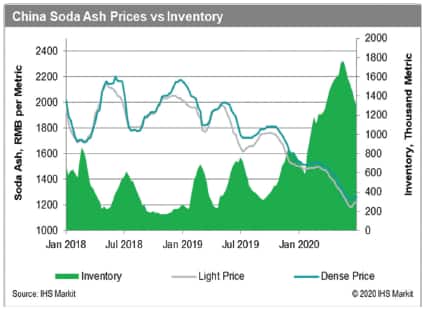 With Chinese export prices falling considerably, its likely that this will put pressure on other exporters to lower prices in the short-term thereby hurting profitability. This will be an issue for the US producers who export approximately 60% of the soda ash they produce with almost half of this volume ending up in Asia (including the Indian Subcontinent). Regions where contracts for soda ash are negotiated on an annual basis are also likely to see downward pressure when these contracts come up for discussion at the end of the year. 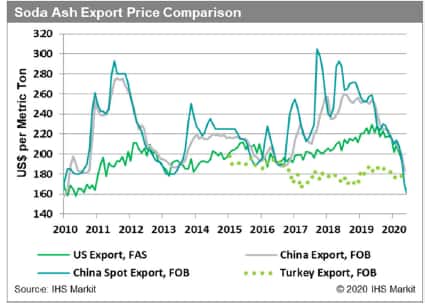 What has become obvious over the last 3 months is that demand for soda ash has been greatly impacted by the COVID-19 Pandemic. The impact has led to a significant decline in spot prices and is also likely to impact contract prices for next year in a similar fashion. Above all, it has forced companies, both buyers and sellers, to reassess their plans for the future. What is less clear is how long a recovery in demand will take and how long the soda ash market will continue to feel the effects of the Coronavirus.

IHS Markit is hosting its annual World Soda Ash Conference on the 19thto the 20thof October, followed by a workshop covering the soda ash industry on the 21st to the 22nd of October. This year's conference will be held online due to the Coronavirus Pandemic, and will include speeches from some of the industry's leading companies, as well as IHS Markit experts.