The old adage that 'no plan survives first contact with the enemy' seems appropriate for this year. The invisible enemy of the coronavirus disease 2019 (COVID-19) has had a detrimental impact on Vietnam's progress towards its socio-economic goals for the 2016-2020 period. The effect of the pandemic on the economy in 2020 means that some goals are now unlikely to be met, having looked within reach this time last year. Attention now turns to the next five-year period, and hopefully a return to the strong recent economic performance in the country.

Prior to the COVID-19 pandemic, the Vietnamese economy had been growing strongly. Output was up 7.0% in 2019 and seemed on track to meet the goal of averaging between 6.5% and 7.0% growth over the 2016-2020 period. COVID-19 has put paid to this: IHS Markit currently forecasts growth of GDP of just 2.2% this year, bringing the five-year average below 6%. That said, to be able to still generate GDP growth in a year when the economy has faced such disruption is impressive and testament to the country's successful handling of the health crisis and subsequent rebound in activity.

The IHS Markit Vietnam manufacturing PMI showed that production returned to growth as early as June following a period of steep declines at the height of the pandemic between March and May. A bump on the road to recovery in July and August was caused by a virus flare up, but then solid expansions were recorded until a succession of storms and subsequent flooding stymied production in November, as shown by today's PMI release. This, however, should be only a temporary blip on the road to recovery. 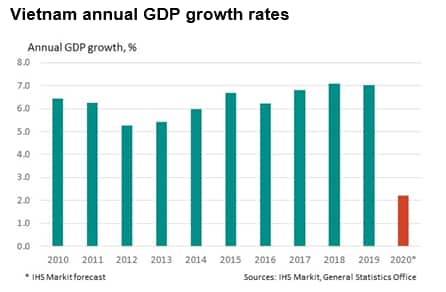 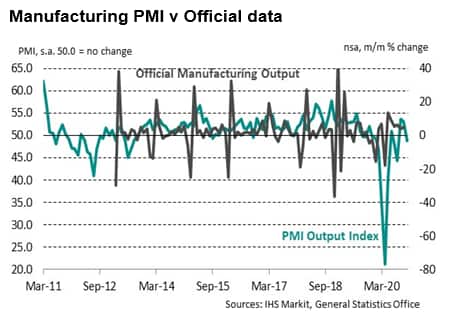 Looking at the historical relationship between the PMI and official manufacturing data, the survey data suggest that factory output is increasing solidly year-on-year during the fourth quarter so far.

Elsewhere in the latest PMI survey, new orders expanded for the third month running, but were also impacted by the stormy weather, according to anecdotal reporting from the survey's participants. Total new orders were also undermined by a fall in exports amid a second wave of COVID-19 in some parts of the world, notably in Europe.

GDP per capita target just out of reach

Vietnam also looks set to just fall short of the target for GDP per capita. The aim was to have GDP per capita of 3,200-3,500 USD by 2020, but even without the COVID-19 pandemic this looked to have been in doubt. Even so, the increase over the five-year period is still set to be impressive at around 30%.

The renewed target for 2021-2025 is for GDP per capita of 4,700-5,000 USD, another ambitious goal which will require sustained strong growth of output. 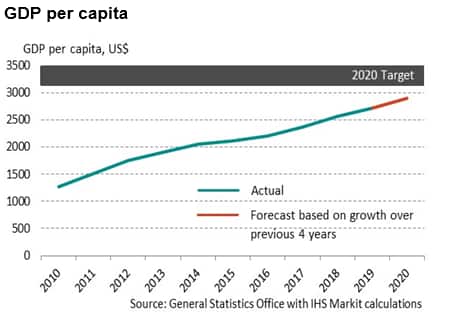 Return to stronger growth likely in 2021

Manufacturers are increasingly confident regarding the picture for 2021, with November's PMI survey signalling the strongest optimism for the year ahead since July 2019. Firms expect the pandemic to remain under control in Vietnam and cause less disruption globally next year.

IHS Markit forecasts an increase in GDP of 6.1% for 2021, with the economy maintaining its position as one of the fastest growing in the world.

The PMI survey will continue to track latest developments on the road to recovery for the manufacturing sector, and will provide a guide as to how Vietnam is progressing on the path to its next set of five-year goals. The next PMI release will cover December data, and be published on January 4th.