Currencies of the Commonwealth of Independent States (CIS) and the wider region will be influenced in the months to come not only by global energy prices and monetary policies of key markets, but also by domestic exchange rate policies, economic fundamentals and sovereign debt position.

Much like other emerging markets, Eastern European and Central Asian (EECA ) economies—which include the nine CIS countries plus Ukraine, Georgia, and Turkmenistan—have been hit by the collapse in both external and domestic demand in the wake of the coronavirus disease 2019 (COVID-19) virus pandemic. EECA is heavily dependent on energy production for export revenues. This structural deficiency has only amplified the blow from the pandemic to the regional economies and their currencies.

The Belarusian rouble has been the worst performing currency this year so far, closely followed by the Russian rouble and the Ukrainian hryvnia.

Both the Azeri manat and the Turkmen manat remain stable due to an expensive effective peg to the US dollar, although the Turkmen manat's black market value declined by around 25% in recent months compared to pre-pandemic levels.

Bucking the trend, the Moldovan leu after an initial depreciation has since strengthened by 4.2%, moving in the same direction as the euro, which during the nine-month period appreciated by 6.4% against the US dollar.

The COVID-19 crisis and the renewed stress on regional currencies have also brought back into the spotlight any weaknesses in the countries' solvency and liquidity position. Intensifying pressure from external finances is likely to be reflected in increased exchange rate stress. 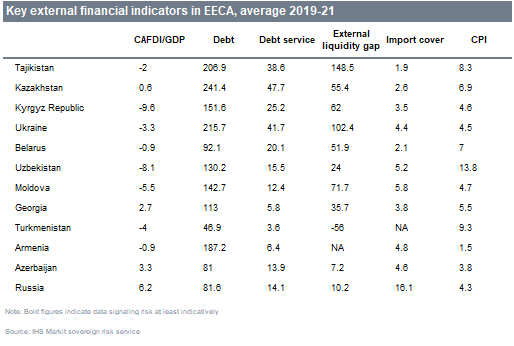 Using the above metrics, Tajikistan presents as the CIS economy signalling the highest vulnerability, with all indicators flagging potential risks.

On the other end of the spectrum, Russia is in a favourable position with total foreign debt standing at 30% of GDP, whilst the debt service to external earnings ratio is only at 15%.

Azerbaijan does not show any external financial risks on purely data grounds. The assessment was done prior to the start of the 27 September military campaign, which will have an unavoidable worsening impact on Azeri metrics.

Compared to the most recent 2014-15 recession and exchange rate volatility, EECA currencies have thus far proven more resilient. The inflationary impact of the exchange rate weakness is being counteracted by weak household consumption. The policy responses have improved, as the Russian rouble, Ukrainian hryvnia, and Kazakh tenge are now floating, thereby acting as shock absorbers.

The US dollar's weakness and extremely low interest rate environment in advanced markets also ease some of the pressure on the EECA currencies. Meanwhile, political pressure on central banks to ease policy to stimulate the real economy during the pandemic makes supporting the exchange rate more challenging.

Overall, in the short term the exchange rate risks tilt to the downside for most of these currencies due to their commodity-dependency, as they will mostly move along the trajectory of market crude oil prices.

Policy missteps and geopolitical risks may add to the downside risks for Azerbaijan, Belarus, and Moldova. The Azeri manat remains vulnerable to the developments in Nagorno-Karabakh, which still has a potential of turning into a regional conflict and threaten its key energy and other infrastructures. A sharp increase in Azeri military spending and an even larger FX interventions to defend the manat's peg suggest that a devaluation of at minimum 18% is inevitable, most likely by end-December if not earlier.

Lastly, weak investment capital and remittances inflows will be an overhang from the 2020 global recession.